Updated on June 28, 2013, with the correct spelling of the word, also renamed from "LoTrack: What Little We Know" 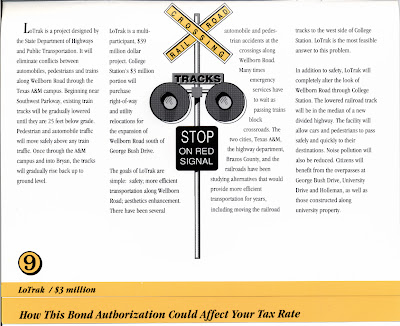 Being in College Station, I can say that The Eagle keeps the worst archives of newspapers around.

One of the more interesting things I heard I've heard about the history of the city was the circa-1993 proposal of "LoTrak" officially) was a way to avoid railroad crossings along Wellborn Road.

The main reason is that both College Station voters didn't want to do it (or was it Texas A&M?) even though TxDOT, the county, and Bryan would do it (it would cost millions, as seen above).

The original plan (seen above) was a sunken trench that would basically allow trains to descend about 25 feet below street level around Southwest Parkway, and convert Wellborn Road to a divided highway. What's bizarre is that Villa Maria Road and FM 2818 (it was FM 2818 back then!) as railroad crossings, which ironically are the only ones today that have replaced their at-grade crossings with overpasses or underpasses since the LoTrak proposal.

I've heard some earlier conflicting stories about this (source and other source), as some have claimed that it would go past 2818, or be partially elevated (possibly around University, maybe, which already had an overpass)

Later the possibility came up of rerouting the railroad to the west (that I remember) around 2001. That was even more difficult to imagine. First off, had they done that, my best friend would've moved out of town (he had lived in River Run). Furthermore, I couldn't imagine (and still can't, frankly) the railroad being abandoned along Wellborn. That would leave a lifeless right-of-way along Wellborn, bumping over patched crossings and seeing nothing but a scarred grass path, which would eventually give way to a full highway.