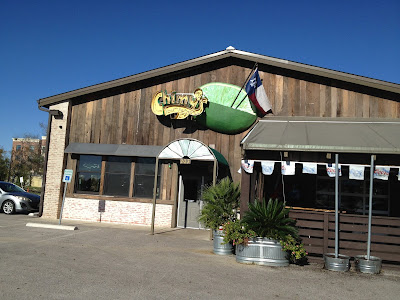 Chimy's sign looks kind of cool at night, but no picture of that, sorry (December 2015)

This restaurant, best known to me as the Deluxe Diner, always had a bit of a special place in my heart, even if I never went there. It was the first thing I saw besides the late Dulie Bell Building if we were going down the ramp from Wellborn, plus it was always featured in a little "menu booklet" that the George Bush Library had in their early days. It started as a hamburger restaurant called the Handy Burger (first reference in papers was 1962), which was the first place in town to have a microwave for food use. Around 1979 (give or take a year), this became a restaurant called "The Onion Ring" (which picked up a well-known nickname probably more common than the REAL name of the restaurant). 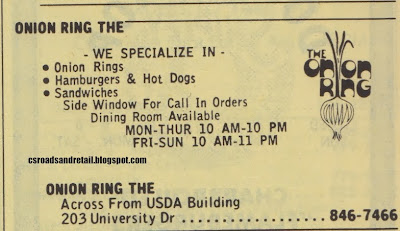 By 1983 it was "The Deluxe Burger Bar" (renamed The Deluxe Diner sometime later), and at some point to be determined, the restaurant's exterior was remodeled (Handy Burger looked substantially different than what Deluxe looked like). 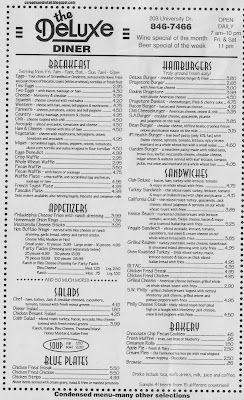 Deluxe Diner menu from better days (c. 1998), note that this is not the full menu 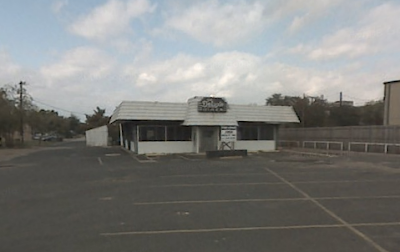 The shuttered Deluxe Diner, Google Street View (c. 2007)
The Deluxe Diner closed in 2006 (that I know for sure) but by that time was in a state of huge decline (food was terrible, management was even worse). Despite having some period diner pieces inside (though the exterior had been modified since the Handy Burger days), the building started to rot and mold until 2012 when most of the restaurant was demolished save for a few walls and was rebuilt into Chimy's Cerveceria, which opened in January 2013. I've never eaten there, based on reports of overpriced food and what I've seen myself (long, cafeteria-like tables). That was disappointing, as I'd been wanting some decent Tex-Mex in Northgate, not a bar. Rest assured, though, with the opening of Torchy's Tacos when I lived at Eastgate, I no longer thought of Chimy's as a wasted opportunity.

So there you go. The tale of one of College Station's oldest restaurant sites in one post. Sorry for the absence as of late...I'll be wrapping up several more of the posts here with one more for the memories.