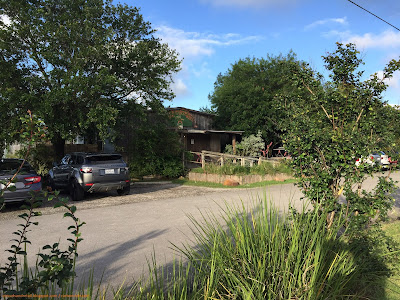 While the trees have definitely grown over the years, it's not quite as leafy and secluded as this picture appears. (Picture by author, June 2019)
One of the most popular pages on the blog used to be a page on Koppe Bridge, the actual Koppe Bridge of which I attached an image from Project HOLD of the bridge from the 1960s. Sadly, as Google SEO rules everything, the page that comes up for searches of that type comes up with this page and not my own page. They talk about Batt's Ferry too, that's where the "modern" photos are from. 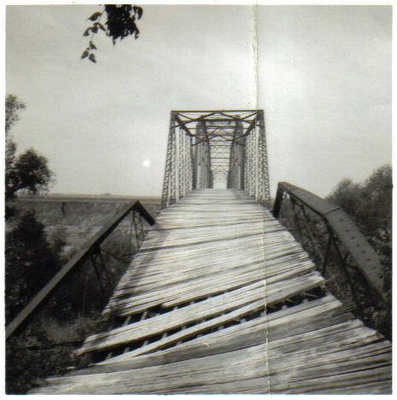 The bridge in the 1960s, already condemned.
Presumably, the bridge was not repaired or rebuilt as it was not worth it to repair, with what was called Jones Bridge Road (FM 60) being a better route in and out of Brazos County, rather into a network of unimproved roads and no direct access to modern-day Wellborn Road. The timbers were dismantled, and despite Google Maps STILL mislabeling Hopes Creek Road as going out to the river and not Koppe Bridge Road going out to the river all these years later, the bridge only has some pilings left that are barely identifiable on Google Earth today.

Once the old Koppe Bridge post dropped out of the top ten posts, I felt that I could convert the page into a format that the rest of the blog uses, on buildings and businesses, of course. Before I settled on that, one of the features that I wanted to cover in the blog fairly early on when I had little idea of what I really wanted to cover were a series of posts entitled "The Wellborn Way" in which I would describe Wellborn Road as going through it in the late 1990s, with all the changes that encompassed it. One of the eventual posts that came out of that mess included the original Chevron in Wellborn and Veronica's Country Corner.

The Wellborn Road as I remember it was pretty empty all the way from Rock Prairie to Wellborn, with little things that disappeared over the years, such as a small shed at Deacon and Wellborn (with a roof turbine) and a series of telegraph poles that ran from the FM 2818 intersection beyond (these were removed around 1999-2000, shortly before the Rock Prairie crossing was built), and there was Koppe Bridge, located at the corner of Sallie Lane and Wellborn Road.

Over time, small expansions to the building and parking lot were done, with the back parking lot done shortly after the widening of Wellborn Road took out more parking. When Wellborn Road was reconstructed as a divided six-lane road by 2011, it disallowed left turns in and out of Sallie Lane and the Koppe Bridge parking lot.

Balcones Drive was built sprouting off of Wellborn (it did not connect to Balcones Drive off of Welsh), and Sallie Lane was deleted entirely. The mobile home directly behind Koppe Bridge, I remember had an address of 2799 Sallie Lane, but after Balcones was built that whole property became 200 Balcones. The entrance from Sallie Lane to Wellborn was cut off, part of it became a section of Koppe Bridge's parking lot and the rest became a new driveway off of Balcones.

Koppe Bridge's website claims that the building was "originally an old feed store that we converted into our restaurant" and "some of the original timbers in the floor at the Wellborn Road location are from the old Koppe Bridge that spanned the Brazos River until the late 1920's when it was eventually destroyed by flood waters".

Well, the bridge was not destroyed in the late 1920s, it was in the 1960s...but the building actually isn't that old. Brazos CAD has the building being built in 1987 (it wasn't in early 1980s aerials), which begs the question of how long those timbers were sitting in storage before being used for the building...if it's even true at all. From 1988 to the very early 1990s it was TomPac Feed & Supply.

As their website states, Koppe Bridge opened in October 1992, with other additions completed later over time in the style of the original building (the oldest part is the dining room between the main doors and the ordering counters), but despite the deceptive age the building, it certainly feels a bit out of place with the modern Jones Crossing. Most of the parking lot is still unpaved (grandfathered in) and at some point the residence(s) behind it will be torn down for commercial development.