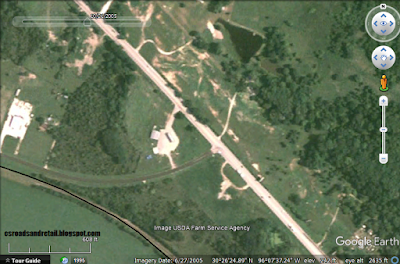 This is so obscure only the blurry 2005 Google Earth image shows it.
I lived in Houston for a little while and because I still had connections in College Station, I drove back and forth from College Station to Houston, and that included a lot of Highway 6 South between Navasota and College Station. That little section of highway used to be notoriously dangerous, as it was a four lane highway with no medians (just a double yellow stripe), and enough hills and little driveways to make it a significant hazard. But for me it was before I was driving and thus nostalgia. Usually the only time we drove on that section was to go to Baton Rouge (ultimately) though Houston too.

I do not lament the passing of the original roadway, though I still can "see" in the minds eye where the exit to FM 159 was, and that was back in 2005 (this is a reference to another one of my old blog posts, though I'm not linking to it). Now, with every thing that goes away, some fond things go away with it. I know that the post up there says "Veronica's", and I promise I'll get to that, but first, an ode to a defunct roadside park.

Despite there being a similar roadside park between Hempstead and Navasota, I do remember vaguely the roadside park in Brazos County. I don't remember much of it, it was literally a little driveway loop off of the southbound side of the road, just south of FM 159. Most of the pavement is actually still there.

Anyway, last week I went to the State Fair and I noticed south of Waxahachie a relatively recent closure of one such roadside park (new barricades, and a construction vehicle parked ominously near the southbound rest area), fresh enough that even Google Earth still had it open. The thing is, as much as there is nostalgia for these things, and I can definitely say that while they were an iconic part of traveling down highways when I was younger just like roadside hotels and restaurants, they are functionally obsolete and to an extent dangerous.

One such park closure in recent years was in Sealy, Texas, with a large road side park in the inner median of Interstate 10 (though the two "halves" did not serve as turnaround lanes). It's not just the fact that people would prefer modern travel centers, restaurants, and gas stations, it's the fact that usually they just breed trouble, with illicit activities and illegal dumping. As for the dangerous part (besides the chance of being in the wrong place at the wrong time) the short ramps make acceleration and deceleration a pain, you would not want to pull out of a parking space for someone to be barreling down the strip at 45 mph or higher. That would suck.

The other thing that disappeared during construction was the only gas station between the Exxon at William D. Fitch (still the furthest south gas station on the freeway) and the gas stations at Washington Avenue. I'm not sure when it was built (after 1995) but if it was before the opening of the Exxon/McDonald's, then the "last gas in Brazos County" would be what was a Texaco at Barron and Highway 6.

Veronica's Country Corner, as health inspection records state (at 26000 State Highway 6 South), was demolished around early 2006, and I remember it being extant at least as of 2001 (I would appreciate more information...) and I want to say that the gas canopy was fairly large (the aerials make it a bit hard to tell). Sadly, because I lack photos, ads, or a lot of meaningful memories of it (I never even stopped there), I can't say much about it, and only want to bring it up to make sure it isn't forgotten. If this topic seems vaguely familiar to you, I did "sort of" cover it on the blog a long time ago, in a now-removed post that covered Millican and the southern end of Wellborn Road.

UPDATE 09-18-2021: Veronica's operated between 2001 and 2005. Today there is "Veronica's Daquiris" on the site, with the same address and ownbership. New labels added. But, there was one more gas station on Highway 6 that I somehow missed...
Posted by Pseudo3D at 3:21 PM