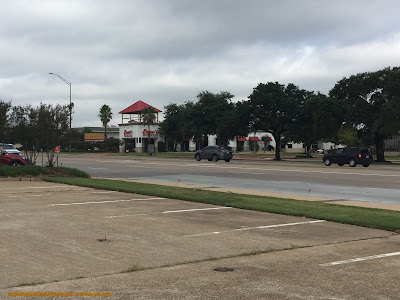 This car wash is built on the remains of a small hamburger restaurant that despite making an impression on me, didn't even last a decade.
Before continuing on the Harvey Road series (which will be restarted next week), there's a quick stop on Texas Avenue that I've wanted to cover. One of the "College Station of the 1990s" features that I do remember was a small hamburger restaurant across from Parkway Square (which, by the way, is the most popular page on this blog)...Red Line Burgers at 2401 Texas Avenue.

The restaurant has long been a mystery, since I only remember it being boarded up before being wrecked for Shammy Express Car Wash in the early 2000s (which around 2014 renovated into Drew's Car Wash), you can see the pre-Drew's on Google Street View.

Only did a December 2014 visit to the Dallas area spark my memory as I realized a small hamburger stand was almost the exact one I'd seen in my memories. Sadly, the aforementioned Red Line is now a memory itself, having been closed the following year and demolished for a 7-Eleven, but it did last long enough to make it to a Yelp review.

Further looks into the restaurant that predated Shammy/Drew's showed that Red Line built the College Station store around 1993, and was based out of San Antonio. Even by the early 1990s, they were having some trouble keeping stores, this Corpus Christi Caller Times article about a food truck taking the name has a photo of a closed Red Line in Corpus Christi in the early 1990s.

The picture in this post is taken by the author, October 2019.