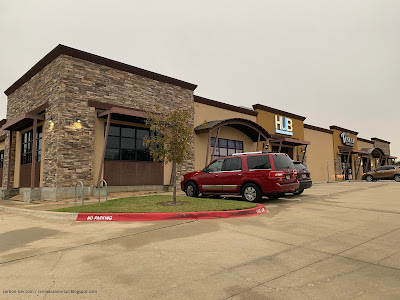 This picture was taken by the author on a miserable December 2021 day.
Editor's Note: This page was originally titled "All Hail the Late, Great, Madden's Street Cuisine" and de-indexed in September 2019. In 2021, the page was rewritten to focus on 404 Jane Street and added to the Index as a full article as "Defunct Madden Concepts".

404 Jane Street is one of the rare "in-fill" commercial buildings in College Station, located off of but not on a main commercial strip, but because that segment of the market is still pretty new it has tended to struggle. There is only one known operating business, Tune Up: The Manly Salon, which opened in January 2017.

The second is/was also HUB Collaborative, a "co-working space" which opened in early 2015 and closed (likely) in 2020, and while the website is defunct, the sign still lights up as of December 2021...so I don't really know. Finally, there was one more restaurant, which has since closed. In May 2015, a new concept started by Peter Madden opened—Mad Taco (suite 400). He sold his restaurant in downtown Bryan, Madden's Street Cuisine to focus on the restaurant, which despite a fairly crowded market in that part of town (Torchy's, Fuego, et. al.) and a near-invisibility from both Texas Avenue and University Drive East did fairly well. A second location opened in south College Station in the next year. In 2020, however, the student market was gutted, and Mad Taco, which already struggled during the winter months, was converted into a new concept, which opened in late 2020 to focus on sandwiches and soups. The restaurant closed around May 1, 2021, and little trace of it remains on the Internet today. The Yelp page has 569 reviews of the restaurant, but only 18 of them are actually of Mad Melt, the pages were merged. While I did manage to get some menu copies from Facebook's cache, someone did take a few photos of the menu on Yelp, as Mad Melt came and went without much bravado, and now the restaurant, which began with so much hope as Mad Taco, is closed.

It was not, however, the first concept that Peter Madden had tried and closed. Before Madden's Casual Gourmet in Bryan was sold (and eventually closed), a food truck was operated by him, known as Madden's Street Cuisine. 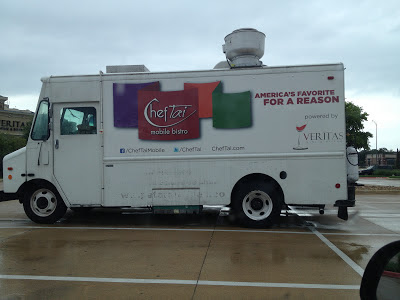 The sad fate of the food truck as of 2012, now a second Chef Tai's Mobile Bistro.

Madden's Street Cuisine, which stopped delivering deliciousness around town in summer 2011 is covered here. I ate there and got a repeat customer card (completely useless now) and a menu, both of which are pictured here for your infotainment.

The menu actually was printed on old scratch paper: the other side has some sort of multiple-course "Civil Engineering Staff Appreciation Lunch" with classy things such as "Tomato Bisque garnished with fresh mozzarella, saffron whipped cream and fresh basil chiffonade", but I didn't scan it since it's in poor shape (and only half of the page). 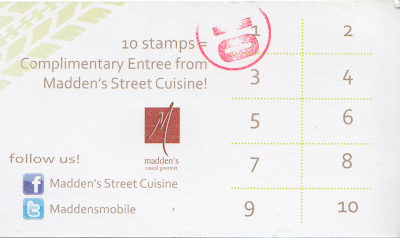 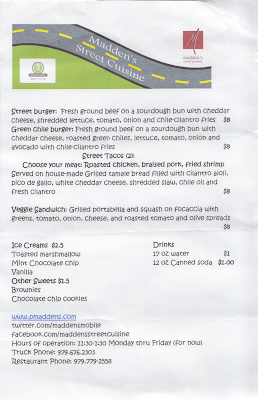 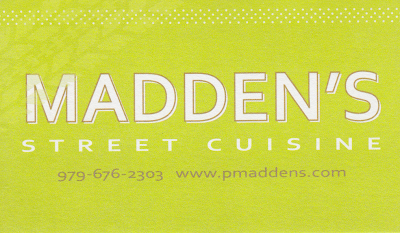 UPDATE 12-14-2021: Just three days shy of this article's 9th year anniversary, this page has been updated as "Defunct Madden Concepts".
UPDATE 04-17-2022: Tacobar is to replace the Mad Tacos/Mad Melts spot, having moved from Southwest Crossing; however, it isn't open yet as of this writing. [Restaurants] was also added to the post.
Posted by Pseudo3D at 3:47 PM