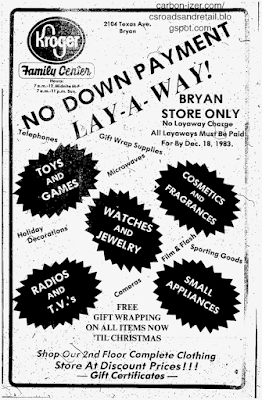 Did I mention I have an ad for ammunition sold here?
Most of the modern Kroger "Marketplace" stores in Houston and Dallas (as well as beyond, and including other Kroger brands including King Soopers, Fry's, and Smith's) all come from Fred Meyer, a company based out of the Pacific Northwest Kroger bought in 1998, featuring a full line of merchandise, including clothing, hard goods, jewelry, and of course, food.

Years before Kroger even involved itself with Fred Meyer, Kroger began an experiment to make a true "supercenter" with a full line of products including apparel and sporting goods. Most of the early of the early stores were closed or converted by the early 1970s to traditional Kroger stores but the Houston-area stores were an exception, with Kroger Family Centers going all the way down to the border.

Before we get into the history of this Kroger, the store at 2104 South Texas Avenue opened in 1969 as Cooks Discount Department Store, owned by Cleveland-based Cook United. Due to CU's rather spotty growth across the nation and already distracted with diversification ventures, Cooks closed in the late 1970s and was renovated into Kroger Family Center in 1977. (Cook United would file for bankruptcy in 1984 and cease to exist by 1987).

The Kroger Family Center replaced a smaller store at Manor East Mall with the store opening in 1977. with a wider selection of merchandise.

Store facade as it appeared in 2004, featuring the modified facade

While the "full line" continued into fall 1985 (and long after many of the other Kroger Family Center stores had closed, like Victoria's), it wasn't too long after that the store remodeled to resemble the then-common "greenhouse" facade and the merchandise mix altered to have the basic Kroger "food and drug" mix, much like what the College Station store had.

The strangest fact is that there appears to be a significant gap between the closure of this store and the opening of the next, a Kroger Signature store at 2303 Boonville Road. Usually when a store moves, either both remain open (briefly), it can open next day, or a total closure for two weeks. But from the way it looks, it looks like it was closed for about three months.

The new Kroger opened in April 2006 but no mention was of the older store, because when the news came when the short-lived Bryan Albertsons closed, it was mentioned that the Kroger had closed in late 2005. Combined with the fact that the new Kroger isn't meant to really appeal to the same crowd as the Kroger it replaced, it suggests that the Kroger was a loser store but Kroger still wanted to stay in the area.

A few years after the store closed, it was renovated into "Bryan Square Shopping Center". The "fake greenhouse" was retained for the 99 Cents Only Store but the rest of the facade was remodeled. Other stores added in front of the store were Citi Trends and the Dollar Floor Store. Interestingly, a small building on the south side (at Post Office Street and Cavitt) with some smaller tenants still remains, as well as part of the original Cooks/Kroger facade next to it.