I never did get any Manor East Mall pictures before year end, so went ahead and override what I had planned and released what we have today. I regret that I gave a lot of what I discovered--including the discovery of Britts as the first anchor--to Mall Hall of Fame, as well as an early name of the complex (pre-building): the "Manor Village Shopping Center", but here it is at last.

Manor East Mall has long has been a favorite subject of mine, dating back to this little summary I wrote for DeadMalls.com a few year back with an outdated Internet moniker, which was clever but ultimately stupid. (If you know me in real life--the answer should be pretty clear in a few seconds).

I first went to Manor East Mall over twelve years ago, my first and last time, and discovered (by then) it was a mostly empty corridor with a pet store and boarded up storefronts. I seem to remember it was blue, and it had benches. Although originally a "cross", you only went in, and turned right.

With that said, here are some bits about it, including some where you will find nowhere else. Remember, on some of these, you heard it here first!

A lot of false and misleading information is floating around about Manor East Mall, specifically two objects: its initial line-up including a J.C. Penney (which is partially true) and opening in 1972 (which may or may not be true). These facts were derived from a Brazos Valley history book, and I don't know where they sourced that from. This is the REAL scoop. Its initial anchors did include a 68,000 square foot Montgomery Ward (built before the mall, in 1966) and Britts as majors, but not much else about the mall line-up beyond the initial line-up. It included "The Fair", a Houston-based junior department store for a while, a Karmelkorn, a radio station, and some of the initial tenants shown on this 1972 ad from The Eagle (appearing on the Internet for the first time, exclusive to this blog). Some other tenants are listed on MyBCS.com. Kroger also was a charter tenant, though disconnected from the mall. Here's an early, easily-available picture of the Montgomery Ward and Kroger, before the mall was built. 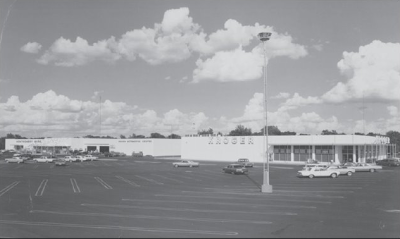 Given that the original anchor, Britts, had its arches on the inside, I'm guessing the Britt's building was built a bit before the mall, which must have opened in 1971 (not 1970). Check out these Britts opening ads and other advertisements from The Eagle. These are exclusive to this blog, folks--never before seen on the Internet. 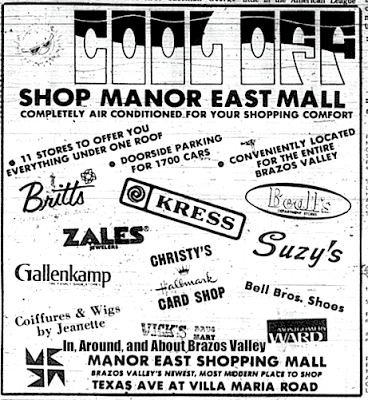 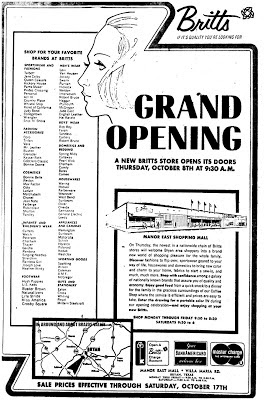 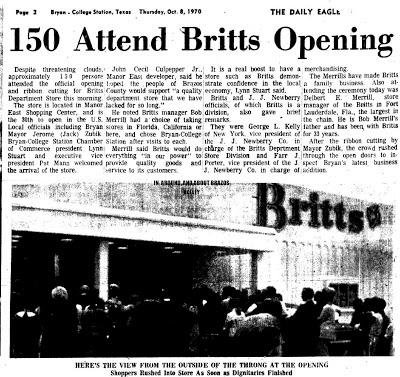 The Manor East III Theaters opened in November 1974. It was the first multiplex in town.

Kroger moved out in 1977, and the space had been taken by Hastings by the early 1990s (although it's quite possible that Hastings was around in the late 1970s--there was a Hastings at Culpepper Plaza).

When Britt's left in the late 1970s or early 1980s, it was briefly filled with a JCPenney (from downtown) before moving to Post Oak Mall. A unique feature of this JCPenney during this time was a rare but not unheard of coffeeshop inside the store, which was almost certainly originally the coffeeshop at Britts. 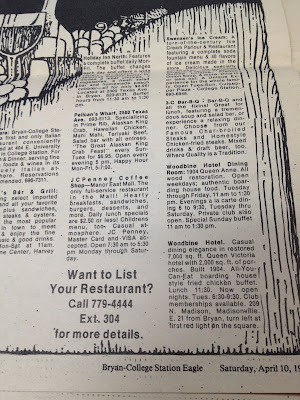 By the late 1980s, it was occupied by a "Food 4 Less" grocery store. During that time, in 1982, Manor East Mall got a third anchor: the world's first mall-based Wal-Mart (which is yet to be disproved). It had two entrances (one exterior, one interior) and was a "brown" Wal-Mart as was standard in those days.

Post Oak Mall was a vacuum that ended up killing the last of the major downtown stores and Bryan retail (including the downtown Bealls, Woolworth, the Townshire Sears, and the Manor East JCP). It even added Dillard's and Foley's.

Wal-Mart was ultimately short-lived, and moved out circa 1994 for a new Wal-Mart Supercenter on the bypass. The mall had a fast exodus of tenants during that time, losing most of its national tenants.

In 1991, Food 4 Less closed (within weeks of the H-E-B Pantry's opening to the north) and it was split between Jo-Ann Fabrics and the 50 Off Store.

In mid-1997 the 'Magination Station, a local playhouse group, moved into the old movie theater and started renovations. But Montgomery Ward closed its only and last store in the area in early 1999, as part of the last round of store closures before bankruptcy.

While the 'Magnination Station (known as The Theatre Company within the next few years) and Bealls still active, the mall soldiered on until circa 2003, when the last of the in-line tenants closed and it was razed by the son of the developer that originally built it. A few of the corridors were converted to in-line space, but it was largely lost.

A few of the stores by the late 1990s had exterior exits. Family Dollar did (though that was a result of being added in the 1990s as a last-chance addition), and Bealls did too. I think these were behind the barriers of the north wall, though. Eckerd, which moved out circa '99 for a stand-alone store, also had one (if you visit Mall Hall of Fame, the map is wrong in its placement of Eckerd...wrong side of the mall, it faced Villa Maria--but correct in other places).

Also during this time, Shivers set up a snow-cone shack near Wayside and Villa Maria Road. This didn't last long, but Shivers survived, jumping to Culpepper Plaza II, and eventually Woodstone--I think it closed circa 2008).

The strip mall next to Hastings largely survived the transition. There was a Payless ShoeSource (moved) and a store called "Lease Town Rent to Own", which later became "Rent City" after the transition much to my bemusement. It later closed.

Gold's Gym was also in the old mall, I seem to remember it was behind the Hastings area. (Actually incorrect in an email. There wasn't enough space back there anyway!)

Here's an overview from 2003, showing where things were. 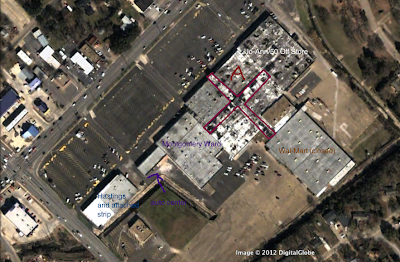 The "A" is where Family Dollar and Bealls had exterior access (Family Dollar opened circa 1997, it seems). There's also the Theatre Company visible. To put it in the present day context, the interior hallway north toward the old Britts has been demolished and replaced with an alley, the east-west corridor is now in-line space (Project: Yogurt, the ink store, etc.), and everything south of it is gone for H-E-B.

Note that in the present day, Hastings has expanded slightly, too. The building to the south had Carter's Burger if I recall correctly but I don't know what else.

Further information on its next incarnation, the Tejas Center, another time.

Thanks to The Mall Hall of Fame (though I supplied a lot of information to it to begin with), The HAIF, MyBCS, and The Eagle.

You'll notice there's a curious lack of interior photos...I couldn't find any, and emailing Stalworth Development (the company that both built it and redeveloped it) was at first promising but ultimately turned up nothing. There's an exterior photo floating around (see Mall Hall of Fame) that is the same view of Kroger and Montgomery Ward taken years later. 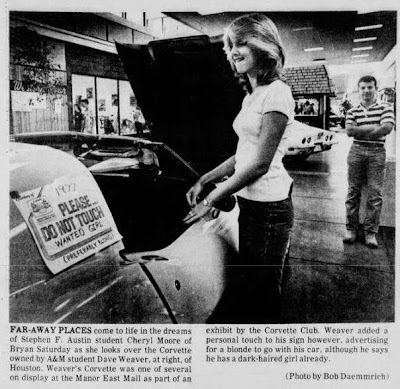 Here's more stuff added as of June 2013 (I haven't actually gotten the pictures yet, except for one): 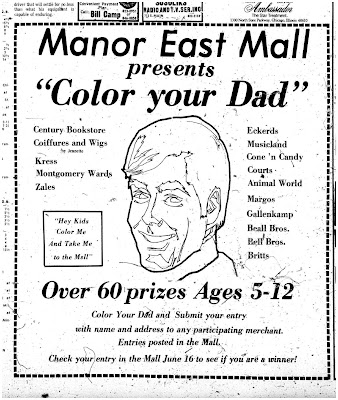 An ad from 1973. I find this hilarious since they seem to indicate everyone's father looked like that goofy guy from up there. Also, note that "Bell Bros." and "Beall Bros." are pronounced exactly the same. 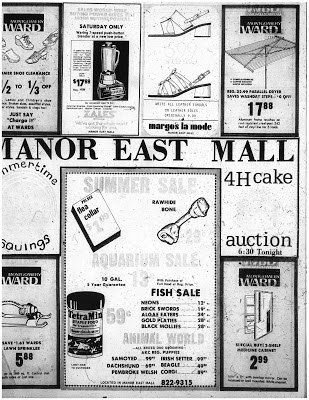 Although I was sloppy in getting this from the microfilms (cutting off some), this 1973 ad has Animal World featured, which was one of the last in-line stores to leave, and one of the oldest. It was where we got some stuff immediately after getting our cat in 2000 from the animal shelter. Sadly, she's no longer with us.

Crafts Etc. ad from 1994. The theater had closed by this time.

If I got anything wrong, or you'd like to add something, leave a comment! Or send an email!

In later years (1990s), the mall still held a variety of local tenants even though the best days had long left it. Here are a few gathered from local publications. A beer and liquor memorabilia store? That's cool, I guess.


Last updated 9/21/14 with a new picture by John Ellisor and another small change. Did you notice it?