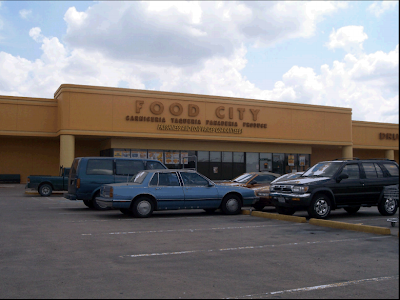 A brief stay as "Food City" (after a repaint). There is a tiny picture of this store as an AppleTree on Yelp. (Source: Stalworth Online)

In 1986, the downtown Safeway moved to 2001 Highway 21 to anchor a new shopping center, Culpepper North, presumably as a smaller companion to Culpepper Plaza. Unfortunately, it never gained more than a few stores and has been living with Family Dollar (not the original tenant) and another store space that has changed a few times over the years. As for the former Safeway, it was one of the last group of Houston Division Safeway stores to be built, and the very last AppleTree store to close. Read more about it on Safeway & Albertsons in Texas Blog. Today, the space is split between La Michoacana Meat Market and A&M Furniture.