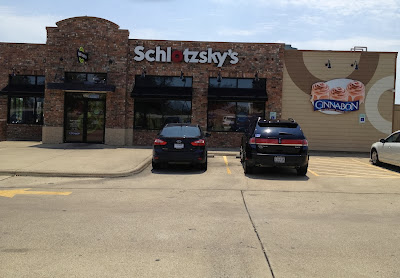 Author's picture from 2013.
Built in 1998 as Schlotzsky's Deli (2210 Harvey Mitchell Parkway South) with indications it moved from Park Place Plaza, they started serving Cinnabon sometime around 2007 (I remember telling one of my friends this back in high school) and has undergone one other significant change, in 2009 or shortly after, they redecorated (with the "lotz better" décor instead of the "Silly Name, Serious Sandwich" décor) and officially dropped the "Deli" part of the name. (This post is split from this one). [Updated to account for the fact that the "lotz better" décor didn't happen until 2009].