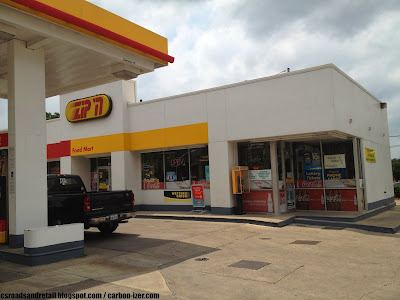 Metapost time: you'll notice that the site is back to what it used to look like for a number of reasons but with a few differences, like a larger text size (still under consideration) and a start to get rid of the dated Impact font, which mobile doesn't even use anyway. Additionally, this is going to be similar to future posts, taking a break from all-new material to expand on older posts, or update old ones.

The Shell (609 University) has been here for many years, dating back to the mid-1960s with renovations in the mid-1980s (a new canopy, and likely the start of the Zip'N name, as the Zip'N name does not appear in early 1980s phone books). The signage next to University has also been the same for years (though I can't recall if the sign was demolished during the University Drive construction), gaining few updates over the years, like when the Shell logo was updated in the early 2000s. An interesting feature of this store is that it has a decent selection of Indian food (Battalion link), when this began I don't know but it's been that way since at least 2012. Gas is usually priced ten cents higher than elsewhere.