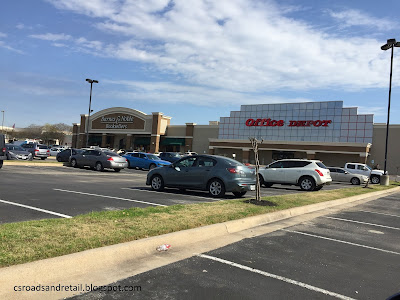 This view really hasn't changed all that much in two decades.
Like my collected directory notes shows, the buildings along the stretch where Barnes & Noble et. al. now were a ragtag group of tenants (Oakridge Smokehouse like the one in Schulenburg, Lords & Ladies, and a few others) but that unfortunately can't be covered in this first edition (maybe another time).

Lone Star Pavilion was built in 1997 with Barnes & Noble, Office Depot, and a few smaller shops, and a Best Buy built two years later. It is one of the few shopping centers in the area with the anchors (and their logos) looking almost identical to when it opened. The oldest "segment" of the shopping center is the Lupe Tortilla (813 Texas Avenue South), which opened in 1983 as a Red Lobster as part of a rapid expansion of the chain under the ownership of General Mills. The Red Lobster moved out in 2008, and after a few years of vacancy it was reopened under Lupe Tortilla, which kept the exterior. Lupe Tortilla isn't part of the center, never was (that's why the "and Friends" is in the title). 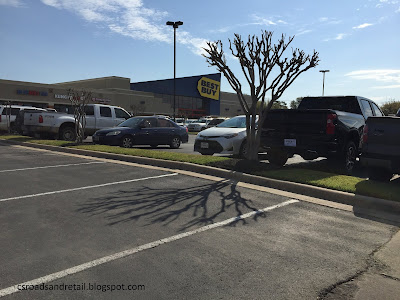 The interesting part about Red Lobster is when the new center came in, most of the parking lot was kept, with new medians added and the parking spots repainted.

Most of the main center I grew up around and had entered numerous times. It was always a treat to visit Barnes & Noble Booksellers (711 Texas Avenue South) or the Best Buy (more on that in a bit). The interiors of these can be seen on places elsewhere. 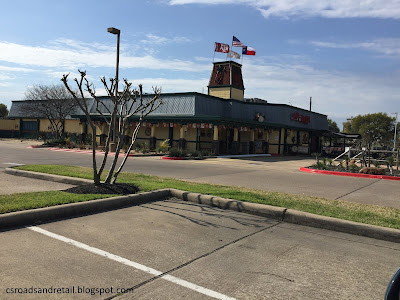 Office Depot (715 Texas Avenue) was right next to the Barnes & Noble, and next to that is a recently opened Five Below with a new large facade, this used to be Card & Party Factory, and since it was originally an in-line store (albeit a larger one), it's still a bit smaller than other locations. Next to Five Below used to be The Bear Mountain Outdoor Gear (also with a 717 address). It opened in 2012 as Overlanders, a spin-off of The Bear Mountain of Waco. It became The Bear Mountain Outdoor Gear two years later, and after ownership changed in 2017 (still keeping the name, presumably licensed), it closed in 2018 as it moved to a new location at Park Place Plaza inside a new Ace Hardware, in the old College Depot space. This used to be Golf Etc. but I don't know what preceded that. At 719 Texas there's an embroidery shop called "And Sew On". Next to ASO is Solar Nails & Spa at 721, Kung Fu Tea at 723 (here since at least 2017, previously A&M Outlet and before that Hobby Town USA, which opened in 2002 and later moved to Central Station before closing), and finally Freezing Cow Rolling Ice Cream (previously Albert's Hair Design) at 725. To the right of that is Best Buy.

Early on, there was also a Zuka Juice (later Jamba Juice) in the complex, it closed sometime before 2003. The Best Buy (801 Texas) is at the end, and goes through mild remodels now and then, I remember it going from carpet to tile (or was it the other way around?)