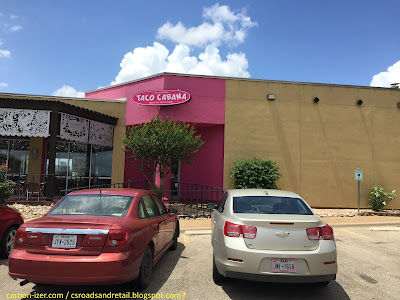 Picture from May 2019 by author.
Texas Avenue has always been full of restaurants and hotels, and occasionally both. Saber Inn was one such place at 701 Texas Avenue South, and featured a restaurant along with a small motel section (just 36 rooms) and a cloverleaf-shaped swimming pool. As not many restaurants were in town in those days, hotel restaurants were a viable choice when dining out for locals. (Nowadays, most of the hotels have restaurants near them, not in them, though there are still some notable exceptions, like the hotels at Century Square).

The motel was torn down years ago. From what I've read, it lasted from 1957 to 1982, and then became "Baker Street Restaurant & Bar" (unknown if related to the Baker Street Pubs in Houston, some of which have since closed), and that was torn down too for a Taco Cabana (unless of course, I'm wrong again and the restaurant was at the motel site), which opened sometime in 1989 (Brazos CAD says the main restaurant was built in 1988 with the patio in 1989).

Saber Inn had a restaurant as well, but the scan cut off the address.
For years I argued that the Grapevine was never in the Saber Inn (partially because for years they ran another location down the road from Saber Inn), until I did find proof of it in another phone book; seems they took over the dinner service at one time while expanding to have wine and cheese. Unfortunately, I didn't write down the date, and I still need to work on the chronology of that.

Taco Cabana would stand guard at the corner of Live Oak and Texas Avenue for over thirty years, though the logo and exterior updated as the chain changed its image, with the last incarnation being tan with pink accents, and a pink sign with white lettering. This would come to an end in January 2020 when the store and 18 other Taco Cabana restaurants closed with parent company Fiesta Restaurant Group citing underperformance (given the competition Taco Cabana faces between Mad Taco, Fuego, and Torchy's, all of which produce a superior taco at a better price point, it shouldn't be a surprise).

UPDATE 03-15-2021: In March 2021, Las Palapas (also from San Antonio, like Taco Cabana) opened. "Las Palapas Aggieland" as the sign says, has a color scheme in terms of lighting that resembles a bit of how Taco Cabana used to be. Post renamed to "Former Taco Cabana" to better reflect state of pictures.
UPDATE 07-21-2021: Removed [Defunct] as Las Palapas now operates in the spot. I should also note that it is open 24 hours (except on Mondays and Tuesdays), making it a rare 24 hour sit-down operation. Menudo is served on weekends.
Posted by Pseudo3D at 7:00 AM