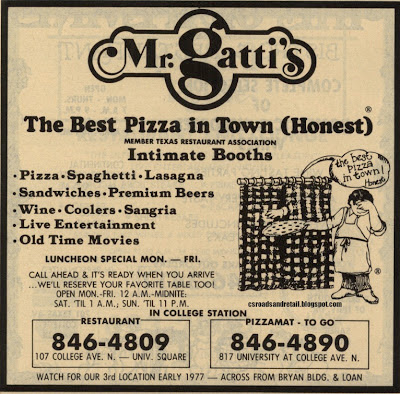 One of the new restaurants of University Square was Mr. Gatti's (opening 1974), which had the tagline of "The best pizza in town (Honest)", and by all accounts, it was a decent pizza place. It had two levels, cold beer, and, as the ad above indicates, did have live entertainment (like a pre-fame Lyle Lovett). For nearly two decades, Mr. Gatti's thrived at 107 College Avenue.

The "pizzamat" (817 University Drive), as indicated above, was a take-out pizza and beer building and had the address of 817 University Drive. It is now the home of the little drive-through ATM (First National Bank?) which was Mt. Aggie Snow Cones in the late 1980s and early 1990s. The pizzamat replaced, and had the same address as the "Rao Drive Inn", an extremely cool looking drive-in straight out of the 1950s, was closed and torn down in the early part of the 1970s.

"54" is scribbled on the side. Did it open in 1954? (from Historic Brazos County: An Illustrated Journey)

By 1996, Mr. Gatti's (by now the only one left in town, the Bryan one having been closed for a time, it was now China Garden) finally was closed and replaced with Gattiland, as the ad below indicates (how do I know it's 1996? Check the bottom picture). Gattiland wasn't anywhere near the old Mr. Gatti's, as it was in Bryan some miles up. It didn't even cater to the same clientele at all (though Mr. Gatti's arguably was heading this direction, a buffet wasn't offered in the 1970s), and the story of that restaurant from here on out would only get worse... 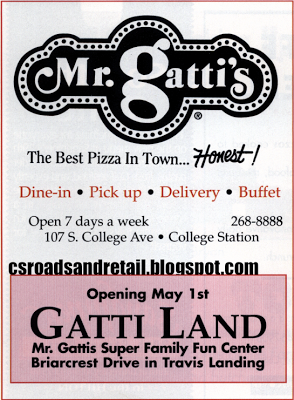 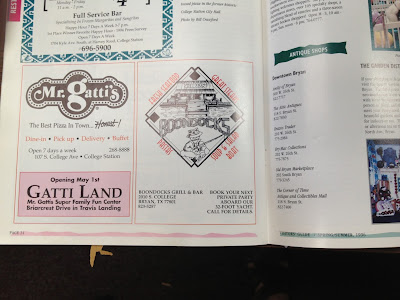 Shortly afterwards, the building was torn down, and in 1997, a new Schlotzsky's Deli (now just Schlotzsky's) was built on the spot. 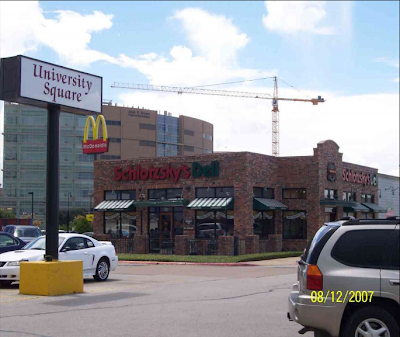 Prior to dropping the "Deli" and adding Cinnabon. The patio has been expanded since then (2012). From Stalworth's website.