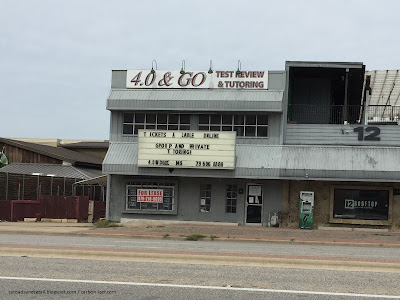 April 2020 picture again, later on we'll get to some livelier but older ones.

With Hullabaloo Hall now covered, I'm going to try to do a complete "walk" down University Drive, excluding the things already covered. What would be 201 University was a gas station (Magnolia brand) demolished when the underpass was originally built, 203 University was Deluxe Diner most of my life and Chimy's Cerveceria for the better part of the last decade, and now we get to 205/207 University.

It is a building with metal siding, 205 University. While it was an eatery called M&M Grill (not to be confused with A&M Grill of the distant past) in the mid-1990s, it was later the flagship location of DoubleDave's PizzaWorks (moved from 211 University), until it moved off of Northgate for good in 2006. It is unknown as to when it was built, one resource (Northgate Historic Resources) says mid-1960s, while BCAD says 1987. (Presumably, 1987 was when major upgrades were made to the building...with "New York Bagel" possibly being the tenant in question, which preceded M&M Grill as per a 1992 document). As of now, 1960s will be marked when the building was built.

This building also has the address of 207 University (though it has not used it in years), likely used for an upper level area (both what is now as of this writing, Icon Night Club and Loupot's had the same thing).

As of this writing, the libraries are closed so it is difficult to find more information on the building's history, but a 2005 phone book seems to place DoubleDave's at "209A", even though 209 (next door) was Aggieland Flowers & Gifts (and did not have a separate entrance).

By 2007, DoubleDave's was gone (still barely visible under the new Schotzi's sign) and replaced with "Schotzi's & Skyybar", with Skyybar presumably on the upper level of the building (the area above 209 University had not yet been built). Sometime around 2013 or 2014, Skyybar simply became Sky Bar but in 2015 Schotzi's folded entirely and was replaced by 4.0 & Go, formerly located at Park Place Plaza.

As you can see, 4.0 & Go is gone from Northgate. Presumably, the high rent drove them off, despite a workable parking plan. By spring 2020 (before A&M was closed for the semester due to virus fears), 4.0 & Go was out of Northgate, listed on their website (as of this writing) as being "in transit".

UPDATE 12-13-2021: A drive-by of the building reveals that the building has been re-tenanted as "Good Bull Icehouse" (no relation to the now-defunct Good Bull BBQ). [bar] has replaced [defunct] in the sidebar.
Posted by Pseudo3D at 11:27 AM