The Nightlife at Doux Chene Apartments 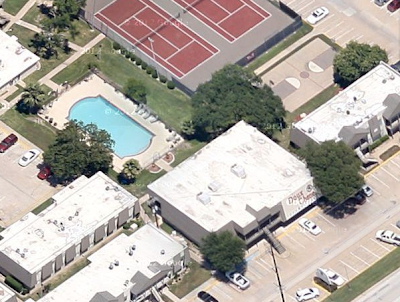 See those stairs leading up to the second level in the main office building? That's the focus today here. (Google Maps Picture)

I originally wrote this in August 2014 and the text below reflects that, as well as an email/addition I got from the owners at the time. In April 2015, however, all this would change when it was sold and was rebranded as "Flats on 12", which so far over a year and a half later (August 2016) looks like the typical game apartments have run in town, change the name, give a repaint, cheap remodel, jack up the rent. This also added a lighted sign on the front of the building and also changed the entrance to the former restaurant/nightclub area (I think it's supposed to be a clubhouse now). This is a bit disappointing because Doux Chene was famously the holdout in these sorts of shenanigans. And now back to our original post...

First off, this is not an apartments review site. Nor is the title supposed to be some sort of snarky joke. Most of the content here is long out of date. If you came via Google looking for information regarding the actual apartments as they stand today, move on. Or not. I could always use visitors here. So, Doux Chene Apartments (I think it's pronounced "doe shane", though I'm not entirely sure, and the translation is "sweet oak") is one of your typical run-down apartment complexes from the 1970s, except it's more than that.

First off, Doux Chene was designed to be trendy, trendy enough that they would actually advertise themselves as "country club apartment living", and trendy enough to be the first true mixed-use building in the City of College Station.

From circa 1974 to late 1970s, it was "Mansard House". Mansard House, despite being the upper level of an apartment complex on the edge of town (sure, why not?) was one of the really nice places in town. Live entertainment, seafood, lobster, lamb, and more were all on the menu. 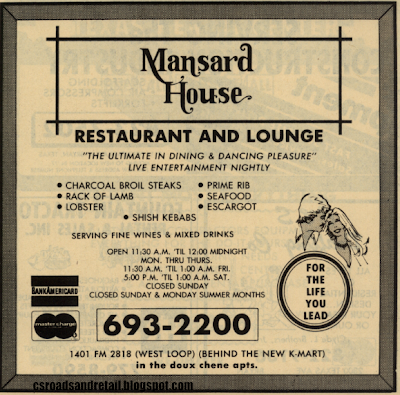 This was the kind of apartment complex Doux Chene used to be, and apparently wasn't one of a kind...the Chateaux Dijon apartments, known for when George W. Bush lived there in the early 1970s, was also the same theme and layout, but unlike Doux Chene, managed to upkeep itself quite nicely.

By 1980, while Doux Chene was still successful, Mansard House had closed and was replaced with Studio 2818, an actual discotheque. 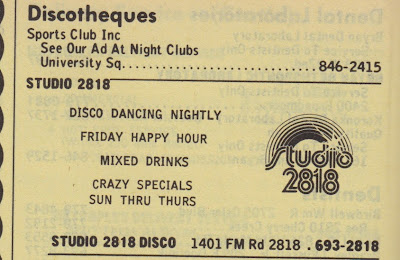 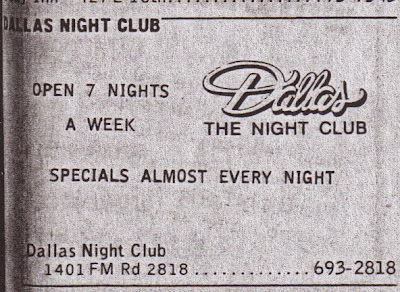 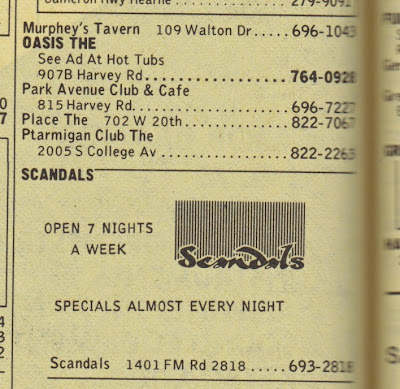 Most of these are sadly relatively undocumented, only whispers across forums and other sources, including stories of ladies' nights with male strippers, with men being let in after the women had several drinks. Perhaps it's better that some of the craziness that went on is better left unsaid (I'm sure there were many regrettable nights).

Doux Chene of course is also a rather unlucky apartment complex, such as a tornado in 2006 striking a building, necessitating its demolition, or the fact that the building caught fire some months later due to improper wiring (it's also worth noting that anytime I read about an apartment complex fire, it used to be that there was a good chance it was Doux Chene).

If there are any restaurants/clubs I missed, or you have any memories of them, please write in the comments.

Since writing this post, we (I) was contacted by a management representative of Doux Chene Apartments, whose name has been redacted for identity purposes.

"While your account of the history of the complex is mostly accurate, I take issue with the assertion that Doux Chene has not 'managed to upkeep itself.' While the property did fall into a state of disrepair in the late 80's to the early 90's, the current management has put a lot of effort (and money) into repairs and renovations and enhancements. While there is no hiding the fact that the property is 40 years old, it is in very good condition for a property of its age.

Doux Chene has indeed encountered more than its share of challenges.

A lightning strike destroyed 4 apartment units, severely damaged a dozen others. No injuries, a quarter of a million dollars in damages.

Severe hail required the replacement of nearly a dozen roofs, another quarter of a million dollars.

And then the small fire that happened shortly thereafter... The fire marshal initially indicated it was electrical, but upon further investigation it was found to be caused by a resident's cigarette butt rolling into a gap at the edge of his balcony.

Through all of this, we have been blessed in multiple ways. Firstly, there have been no injuries as a result of any of these incidences. Also, our insurance company has consistently paid in a timely fashion, and we have been fully made whole. We have also been given the reassurance, that no matter what we face, we will be able to come through it. I won't get all preachy here, but our faith in God has been strengthened through these difficulties.

Some ads were also sent as part of this, including Doux Chene hosting some wild parties (it's hard to imagine even the student-oriented apartments specifically hosting a keg party today) 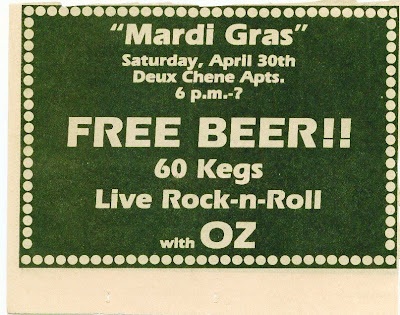 As wild partying obviously upset the neighbors, a nearby apartment complex offered a shotgun as among the freebies you could get for signing a lease. 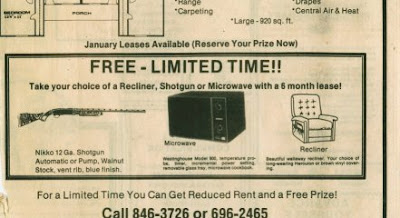