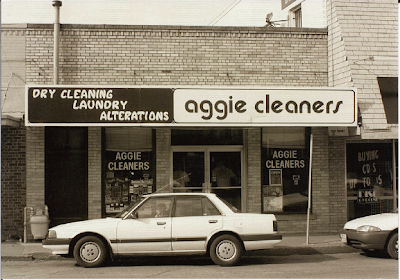 Courtesy Project HOLD, mid-1990s
As always, one of the goal of the current "new posts" is to dismantle the older posts that combined various properties. In this post, we're revisiting Northgate to cover 111 College Main, which was previously covered back in 2014. In my day at A&M it was "Gatsby's on Main", with a sign that said "Since 2004". By 2014, this was mildly impressive, which they celebrated with having drinks at 2004 prices. (I did not participate in that, that's just what I remember). But, Gatsby's did end up closing, with a replacement bar, The Dragonfly, opening in May 2018 (Gatsby's closing is unavailable). Aggie Cleaners was in the space prior to Gatsby's, from as early as 1980 to as late as 1998.