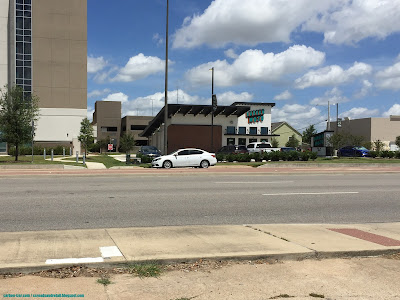 Burger Mojo doesn't have parking lot access from University Drive East, but neither did the previous tenant. (Picture by author. 7/29/20)

Yes, I know it has been a few months since the last update but this site is not yet dead. I actually have been making a few piecemeal updates here and there, and after evaluating the scenario, I will probably still post articles on this site rather than my own site (Carbon-izer), especially as 200+ articles seemed impractical to move. The "new" Bryan-College Station page includes several "street listings" with addresses in order, and hopefully contain some of the "less interesting" addresses that aren't much more than a photo and a brief blurb of information. (There are a number of recent "filler" posts like that on the blog).

The previous building here was a 1977-built office building that was essentially two connected octagons with a center portion connecting them. There were four suites, and each tenant got a floor of one of the octogons, with the center portion having access to all four (the upper level tenants had staircases, like an apartment building). Here's what the building looked like, with it last tenant, Lovan Animal Care, moving out at the end of end of 2015. (One of the other tenants that was there was "Hypnotik Salon & Tan", this left a year or two prior). This was part of the redevelopment of the block that included (but had nothing to do with) the Embassy Suites next door.

Note that the Google Maps Street View has a stone facade on the first level, that was actually a renovation over the original facade, which was mostly wood (which it was as of 2007).

Plans were to redevelop the site as a strip mall with Marco's Pizza and Dunkin' Donuts back in 2016, but ultimately they moved on, with Marco's Pizza going in near Tarrow, and Dunkin' settling in near Deacon and Wellborn (and as of this writing, is wildly popular, with cars still lining up well after dark). Instead it was developed (and opened in December 2019) as Burger Mojo, a new fast casual hamburger concept by the Eccell Group.

Even in a time where restaurants have really gotten screwed over recently, Burger Mojo has announced a second location, at a former Wendy's restaurant at Holleman and Harvey Mitchell Parkway South (and some big news with that, check it out).
Posted by Pseudo3D at 9:59 AM