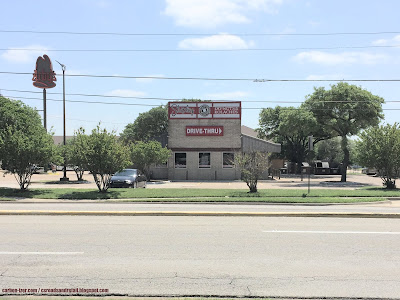 If I had to describe "which road best represents my childhood", it would have to be Southwest Parkway. There was the Citgo there at the corner of Southwest Parkway and Wellborn, before Southwest Crossing was built, a common fuel and convenience stop (more will be discussed when the gas station is added), the Texaco station at Welsh Avenue, those weird townhome-style apartments catty-corner to that (Embassy Townhomes), South Knoll Elementary School (where I went to school, and was once covered on this site, though mostly I described its dark, pre-renovation corridors), and small streets where family friends lived.

Further down the road was Parkway Baptist Church and Bee Creek Park, where seasonally Adamson's Lagoon (which I also used to have a post on) would be a great spot to take the family. It's not nearly as good now, I haven't been to it for years (my siblings grew up and left home), but it did decline objectively, with the floating snake and frog eventually being chained to the pool floor (if they're even still there—and I do remember the incident as to WHY they're chained), the crowds increasing (with the price), and the removal of the diving board.

Parkway Baptist Church was where my Boy Scout troop was located (I never became an Eagle Scout) and, it's hard to notice from the street, but a few houses down you can see that there's a duplex with one side of the house having slightly different brick than the other. The reason for this is because around 2000 there was no fence from Southwest Parkway and it was used as a front yard (there's a small alley off Welsh). However, one night a drunk driver careened off of the road and crashed through the side of the house, killing a young girl in her sleep. I don't have the news story with me but that's how I remember it happening. As I passed the area pretty frequently I could see where the front of the house was boarded up, and although it happened gradually over the next 12 years, eventually all the houses between the church and Welsh had fences built along Southwest Parkway.

Finally, there was Parkway Square, featuring Kroger (of course), but also Baskin-Robbins, a video rental store, and a McDonald's that was often visited. I know I've covered Arby's and what I mostly remembered as a vacant building but there was one place I haven't covered yet, haven't even mentioned it as of this writing except for a throwaway line on the Post Oak Square article. That would be Shipley Do-Nuts, located at 1716 Southwest Parkway, originally built in 1984.

The "do-nut" shop is best known before its most recent facade update around 2017-2018, with its appearance which removed the message board as well as changed the main signage piece. The new remodel also removed the tiny marquee lightbulbs around the signage, which used to light up and dance around the sign. I don't know the specific reason they stopped, whether it being too expensive to maintain, machinery got broken down, or ordinances preventing it. (Probably both).

UPDATE 03-12-2022: As of this writing, I'm working on a full Southwest Parkway page on Carbon-izer.com, so check that out soon. One thing that I failed to mention in the original 2020 article is that a car apparently took drive-through a bit too literally and crashed through the front of it, so the brick in the center front is not original. It happened sometime in the 2000s and was the ol' "confused the gas pedal for the brake" problem. I also failed to mention the shop was opened in 1988.
Posted by Pseudo3D at 11:59 AM