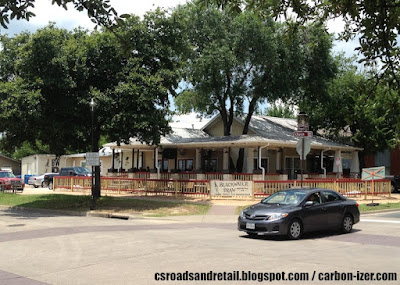 I liked Blackwater Draw's food, despite its shortcomings.

Back in the days prior to the 1950s, professors lived in houses on campus, from the place of the modern-day Memorial Student Center and parts south. Most of these buildings were not demolished, however--they were literally partially disassembled and placed in other parts of town. The house on 303 Boyett at Church Avenue is one of them. Of course, a lot of them still have been demolished, but the one at Church and Boyett hasn't. I'm not sure of the house's history since being moved off-campus, but it has served as restaurants in recent years.

By the early 2000s, it was "Satchel's BBQ & Steaks". According to Restaurant Row, it was "a casual family style restaurant with a rustic ambiance, a fireplace, cozy booths and knickknacks placed throughout. The cuisine is traditional American fare with beef, turkey, pork, chicken, steaks, and seafood entrées. The bar serves domestic and imported beers, wines and mixed drinks. They offer a kid's menu, take out and catering." 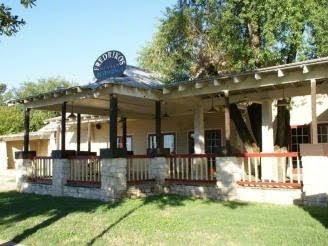 From LoopNet, back when it was Fredriko's
By 2007 Satchel's was gone and it had become a Mexican restaurant called Fredriko's, which I ate at once (it was forgettable, and is now gone). Apparently it used to be another restaurant, as well, but I don't know of it. By 2011 (roughly) the building was "DC, Inc.": the headquarters for Dixie Chicken and other related restaurants (Dry Bean Saloon, Dudd's, Chicken Oil Co.), but by 2013 it moved again (former location of Alfred T. Hornback's) and started to renovate as restaurant space again: the Blackwater Draw Brewing Company, a brewpub owned by the same owners as O'Bannon's. Given the generally positive response to brewpubs I visited in Michigan, I had high hopes but was tempered by the lousy reputation of Northgate (Chimy's, I remember, was a huge disappointment). Reviews looked great though, and upon trying it (in November 2013, if I recall) I found the food to be very good, a decent value (more expensive than a typical campus lunch option) with good beer. One downside was limited burger toppings without an extra charge (even things like tomato). The menu was a bit limited as was the seating. I always wished that they expand and open a larger location, taking the example of The Chimes in Baton Rouge, a popular bar/restaurant near campus, which ended up opening a larger, two-story location called The Chimes East away from campus with a ton of parking (for a restaurant, that is).

In December 2015, they did open a second location in downtown Bryan, but it was only to focus on beer production, and did not serve food. The Northgate location ended up closing in May 2018 due to rising rents in the Northgate area, replaced with another restaurant by fall, "The Spot on Northgate" which was more of the same in terms of Northgate food variety (burgers, beer).

During the Dixie Chicken Inc. days, a banner outside said "Come And Drink It" in the form of "Come And Take It" of Texas Revolution lore.