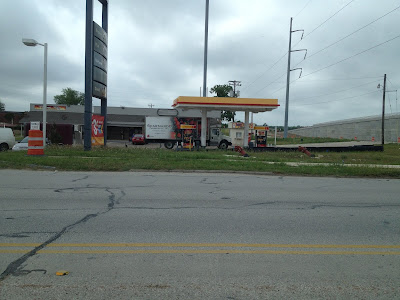 The station following "renovations" in 2013. Picture by author.

I snapped a few pictures of this gas station recently (as of 2013). First off, it's old, from 1982, with one of the earliest references with the food mart (at 1439 West Villa Maria Road) being Nash's Food Store in 1984, and by 1989 it was a Zip'N, which it remained until around 2006-2007 when it just became "Villa Express" (which is there in the pre-renovation picture, albeit quite faded). There was a minor upgrade in 2003-2005 as well, where it kept the Shell station designation but upgraded logos to keep the brand.

Also originally, it did not have access to 2818 at all, the west "exit" to the gas station just went onto a power line right of way, which was unpaved and just dumped you on back on Villa Maria. The snow cone/smoothie shack was there as long as I can remember, and the gas station has two other spaces, including 1437 and 1435. From archives, 1437 was Beetle's BBQ (though occupied 1435 as well), and I've hear people tell me that there was a "music/drum shop" at one time as well. In the picture below, you can see Xtreme Hitz, which is at 1435 and according to Facebook, opened March 2012 (but I never saw them going to summer classes at Blinn that summer), so maybe they opened in October. They appear to carry hip-hop related clothing and clubwear. In any case, I don't remember anything in my travels about a clothing store co-habitating with a gas station (mostly banks, restaurants, and aforementioned dry cleaners). 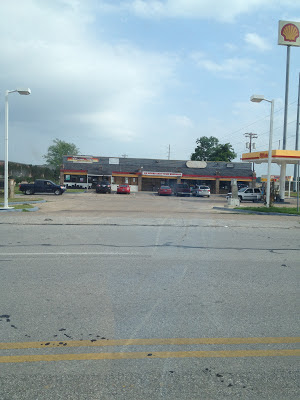 Early 2013 car shot. Because it was taken out the car window, it reflected my shirt. Oops.

For years, the Shell has had for years a billboard near the Exxon at La Brisa announcing the prices. Over the years, I've sadly watched the prices climb (and the sign fade, get repainted, and fade again until vanishing for good).

After a few years running under the "new" facade, the gas station closed up shop for good by 2018. However, the Shell signage still towering over the station. In 2019, it slowly started changing over to a Citgo station and reopened.