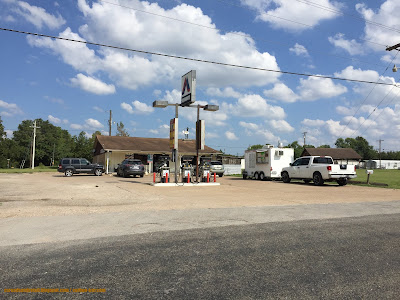 Not what it used to be. (Picture by author, 9/19)
The now-defunct stoplight at North Graham Road growing up was another mythical "beyond the border" point, described previously in the Foxhole Lounge post, with the usual play being that the only reason I would go beyond it was en route to a bigger, out of town trip. In this case, there was a reason to go beyond. A stoplight resided at the corner of North Graham Road and Wellborn Road in the mid-1990s, and there was even a turning lane. To the left was an access road directly toward Victoria Avenue and Rock Prairie Road (Rock Prairie Road did not actually extend to Wellborn), to the schools and hospital beyond it. To the right was a road that went across the railroad and up and down several hills back to North Dowling Road. It should be noted that despite living at the time in the same cluster of rural homes south of FM 2818 and west of Wellborn Road, it was impractical to go home without going back on Wellborn Road, as what is now Holleman Drive South did not exist, and North Dowling was unpaved beyond Hopes Creek Road.

This was where Rolling Ridge Grocery & Barbecue was, a cluster of double-wide trailer homes near the intersection of (what was strictly) I&GN and North Graham Road. The trailer park had fairly well-kept for a number of years, with double-wides and even a small community pool (which as of at least 2017, still appeared to be operational). 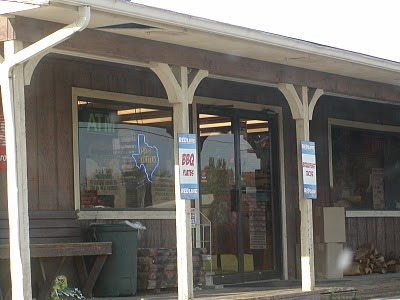 The barbecue was worth going out for, being sold into the early 2000s (though by 2002, the barbecue was not the same as it was in the mid-1990s due to an ownership change). It was also a Shell station. One of the reasons it was a Shell station and sold barbecue is a bit of information gleaned from TexAgs. The "several years" must have only been two as Rolling Ridge was built in 1984.

Interesting that the "Country Grocery" on Dowling Rd. and Rolling Ridge Grocery on North Graham were mentioned in the same post. Interesting, because they were related to each other. Country 4 Grocery was actually the name on Dowling, the "4" representing two husbands and wives, Gene Patterson and wife and Charlie Canatella and wife. Country 4 Grocery was opened in 1982. Several years later, the Canatellas supposedly had a disagreement with their partners and opened Rolling Ridge Grocery to operate by themselves. The BBQ was great at both places, probably because it was cooked similarly.


Back in the Shell days, there was an old poster from the 1980s about a sleeping child not buckled up. This was removed after the Summit branding took over. Regrettably, I did not get a photo. The last time I went inside (around 2011), it was (and still is) relatively rustic. I even remember a few baskets of fresh fruit near the exits (inside, of course). It became a Summit about the time Shell went through a major upgrade: everyone had to update to the new Shell logo or lose the license (sometime in 2003 or 2004), which is interesting as it's the only Summit in College Station now (both the one on Dowling and the one near J.J.'s shut down a while back). 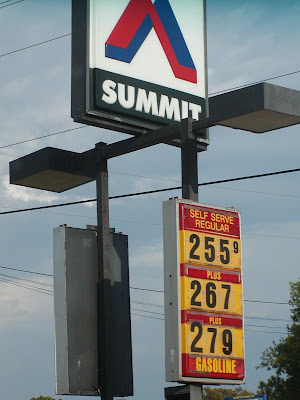 Regrettably, I couldn't get great photos of the Shell/Summit (I didn't want to attract attention), and I don't believe they sell barbecue anymore (smoker was sold, despite the presence of "BBQ plates" in the picture above), which is a shame.