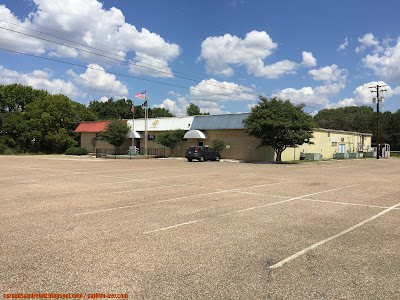 The red, white, and blue paint was probably more vibrant back in the day. (Picture by author, September 2019)

A while back, I used to have a post called "Stories of the West Loop", half actually describing some of the things on 2818 I was too lazy to write a full post on, and half a piece on the nostalgia I had for going north on 2818 to my grandfather's place in Waco. During streamlining, it was removed but an older post, originally called "Turkey Creek: The Old FM" remained.

When I was a kid, there was basically a "border" of places we did and didn't go in town. I'm not talking about anything based on socioeconomic lines or city limits, it was the places that were not part of the regular rotation (dentists, doctors, grocery stores, churches). Roughly the southern line of this was Rock Prairie Road (not that there was much beyond it, even in the late 1990s and early 2000s), the eastern line was the freeway and the things bordering it, to the west, FM 2818 (and FM 2154 at the crossing), and to the north, Villa Maria Road.

Naturally, any venturing north of Villa Maria was a rare occurrence. First would be the actual Villa Maria intersection, which had an Exxon built in the late 1990s with a Shell on the east side, hidden by the trees. The stoplights around the year 2000 had what a lot of other Bryan stoplights had, as the technology wasn't there yet to only show up when you got close to the light, louver shades on the lights. To the north of the Villa Maria light was a divided highway (2818 remained divided until north of 21), and had blinking lights at Turkey Creek Road, which was the north end of Turkey Creek. The south end of Turkey Creek Road closer to F&B Road was (then), a small, poorly paved road heading out to the airport. From what I had found in old maps, Turkey Creek Road (prior to most of 2818's construction) was FM 2513, but the designation disappeared many years ago.

While some trips north on 2818 remained as family still lived in the Waco area, many things about the road changed. The Turkey Creek lights were removed in early 2012 in part due to the extensive construction around the intersection that would eventually include an overpass over Villa Maria and replace the Texas Hall of Fame dance hall structure with a huge Walmart, a stoplight at Shiloh Avenue and the extension of Beck Street, and many others.

Of these, one thing never really changed, the Foxhole Lounge. Also known as Brazos County VFW Post 4692, Post 4692 was established in 1945 but did not move into their current location until 1975, and the events hall has not had much alterations since, at least exterior-wise. 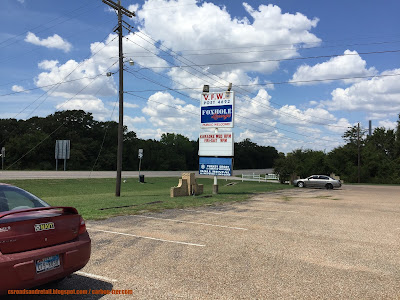 The day this signage is replaced will be a sad one. (Picture by author, September 2019)
UPDATE 05-07-2021: The article was completely re-done in September 2019 but I wanted to mention the address is 794 N. Harvey Mitchell Parkway.
Posted by Pseudo3D at 5:00 PM