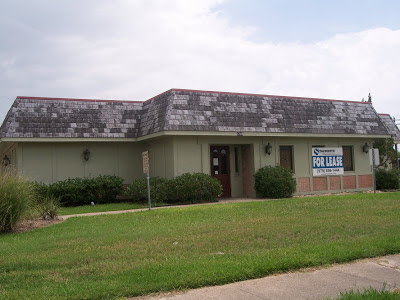 From Stalworth Online, during its days between Oxford Street and Yum Yums

The late Steak & Ale chain opened at 1710 Briarcrest Drive at some point in the early to mid-1980s before being sold to new ownership in 1987 and renamed as Oxford Street in October 1988 (as Eagle has reposted recently). The restaurant closed in September 2008, and it's unfortunate that I don't have more information on Oxford Street than I currently do, but it was a moderately-priced steakhouse (not to Republic or Christopher's levels) featuring "candlelight dining featuring steaks and seafood in an Old World setting" according to the 2004 Dining Guide.

Oxford didn't stay shut for long, as it was soon replaced with a restaurant called "Yum Yums Texas Style". Already there's problems with that: if it looked like a four-year-old named it, you'd be right. There used to be an article on The Eagle, dated March 2009 titled "Yum Yums owner gets back to roots with eatery", which a lot of the following is derived from (the link is now dead). The restaurant opened with the goal of "upper-end", homemade-style food, but it wasn't to last. The name had problems and unfortunate connotations which were called out in comments, with few defenders. It closed in less than a year. By all accounts from the brief time Yum Yums was on this earth, there were very few things to say. There's a scathing review on Yelp that blasted the food (the employees were nice, but that couldn't save it). One review from YellowPages.com (a "kelsey27") blasted it with "this place is totally DISGUSTING... FOOD SUCKS, STAFF SUCKS" and also the contractor was never paid for work done to renovate the restaurant (this is supported independently by third parties). Interestingly, on the original The Eagle article, there was a comment, and this is unaltered:

I CANNOT BELIEVE HOW RUDE YOU PEOPLE ARE BEING TO A FAMILY THAT IS BRINGING REVENUE AND OPPURTUNITIES TO OUR TOWN! GET OVER YOURSELVES AND GO EAT SOME GOOD FOOD. I CAN'T WAIT TO SEE HOW WELL THIS RESTAURANT DOES~

I'm guessing this person was the owner, or at least a close family friend.

Seafood Mama's opened in December 2011, painting the whole building a dark blue color and offering seafood and other items. Never went to Seafood Mama's, as it had very mixed reviews (Yelp's "Greg D." gave it five stars, which may or may not have been faked) but that couldn't be helped, as in late June of 2012, the restaurant was gutted by a fire ([archive]) and it did not reopen. By fall, it was razed. The Seafood Mama's sign still has been up ever since, and as of this writing (July 2020) a Frost Bank is rumored to be built in the spot.

UPDATE 12-13-2021: While the text reflects the last update in July 2020, as of December 2021 the pad has been totally rebuilt with a Frost Bank (opened in July 2021), but construction demolished the sign instead of reusing it. Additionally, it should be noted that Steak and Ale opened in November 1984, meaning its life as a "real" Steak and Ale was extremely short-lived. At least sister store Bennigan's in College Station lived a longer life before it closed in 2008 which did in the remaining Steak and Ale restaurants.
Posted by Pseudo3D at 10:17 AM