Before, During, and After Texadelphia 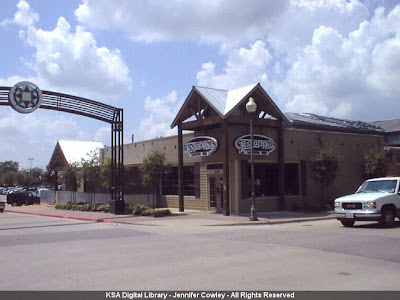 From Jennifer Cowley/University of Ohio (used with permission).

This is another one of the many articles here that involve a revolving door of tenants, with some interest paid that it went from being fairly run down (but at least useful) to fairly run down again. The point of this story focuses on the single most important tenant that was ever in this spot, even if didn't last very long at all.

For what it's worth, I did manage to go to the Texadelphia in Rice Village twice in the late 2000s and from what I remember, it had its own brand of cheesesteaks (not just roast beef and cheese, it was steak) and served with chips and salsa, complete with a mustard-based sauce that would put Layne's to shame.

Going back in time, the Promenade was not there, only Patricia Street, which instead of dead-ending near Freebirds, continued all the way to Boyett. A small building contained a UtoteM convenience store and other stores by the late 1960s.

All of the buildings at the corner at Patricia and College Main dated back to the 1940s. The buildings included 201 College Main was home to the (by 1995, at least, though it hadn't departed that long ago) former Northgate Athletic Club (though it had been Kinko's for many years, dating back to at least 1980, FabricCare Cleaners before that, which was another laundry establishment, "A&M Laundry & Dry Cleaning"). Also, in the 1970s briefly, it was also the home of Victor Caudillo's "Victor's Boot & Shoe Repair", but because I don't have any resources prior to 1980 (that's a drive to Bryan). 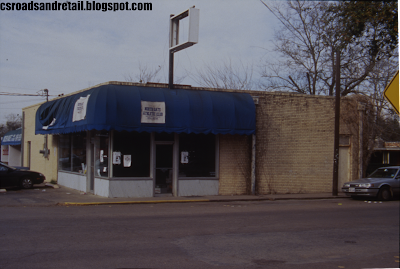 About the same perspective in that Texadelphia / Logans' post as well.

The other two buildings (317-319 Patricia) were eventually combined into one building, the tenant being Chicken Basket by the late 1990s, a fried chicken (and ice cream, looks like) outlet owned by the Sopasakis (as my research on 301 Patricia showed), was owned by George Sopasakis as well and was not given compensation for relocation. No wonder the Sopasakis disliked the city so much. 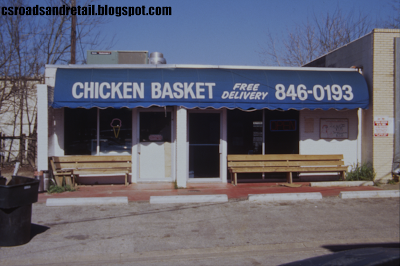 If this was still around when I was in college, this would've definitely been a lunch option for me.
317 Patricia was originally A&M General Life Insurance Company back in '62, McLaughlin's of Corpus Christi in 1975 (hair salon) and 319 Patricia was home to "Custom House" in 1973 (a women's clothing & gift shop, inc. jewelry and macrame) and Pizza Express in 1983 (pizza in Northgate was plentiful in the 1980s). The buildings may have been combined as early as 1984, as 317 Patricia was Emilio's Pizza, which documents listed as being in the same spot as Pizza Express, even though they had different addresses.

Of course, the existence of the restaurant was always a source of controversy, as the short version is they bought some property from an elderly couple for far less than it was worth and sold to Texadelphia at a good profit.

For whatever reason, Texadelphia Sports & Sandwiches as it was then known, did not open in 1998 with the rest of the Northgate Promenade, instead opening in summer 2000. This was likely because of the renovations to the building. It looks like that the original 1940s buildings may still be partially intact...Loopnet said it was renovated in 2000, and a College Station document discussed "facade renovations" to 317-319 Patricia, and compounding this is the second arched area toward the back of Texadelphia, hiding the differences between the roof heights (on Google Maps you can see that this is indeed correct).

In 2003, facing a combination of problems, citing high rent and parking-related problems, Texadelphia owner Willie Madden abruptly decided to close, moving the store to The Woodlands area, as the Houston area was where the owner had more stores.

It became a bar ("Logan's On Campus", despite being a block north of the boundaries) soon after, saying goodbye to a rather neat restaurant designed to make Northgate trendier and instead, arguably, making it worse overall. Now, it could be also argued that College Station wanted to make Northgate into its own version of Austin's Sixth Street, and Logan's did have a sister bar in Austin...Logan's On Sixth.

In 2012 it was sued by a certain steakhouse chain--and then a week or so later the restaurant closed for reasons supposedly unrelated to the suit, but it never reopened. 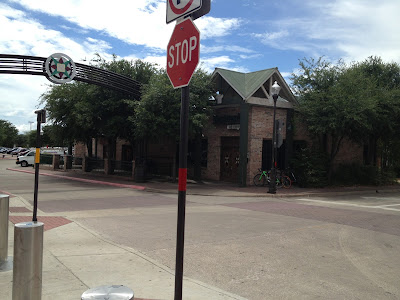 I tried to make it the same angle, as this clearly shows I am not a professional photographer.
Here's a picture of what the building looks like now. Logan's has done some minor changes to the building, those trees grew up, and a stop sign has been placed abruptly in the shot because part of College Main was closed off and became a pedestrian mall (and they still placed a brand-new, full-sized stop sign there). Over the Christmas 2013 break, it changed its name to "Logie's On Campus", likely because of that same lawsuit. In the summer of 2018, Logie's filed plans with the city to renovate the exterior, which involves the removal of the awnings above the entrance that Texadelphia had built.

One more thing: the pictures from 1995 aren't very good. Better prints (but in black and white) can be seen at Project HOLD here (Chicken Basket is linked, navigate back to find 201 College Main).

This was originally two separate articles, one published in May 2013 and a second article created in September 2013 to further elaborate on it. In late 2015, these were combined back into the original post, which was almost completely rewritten, including upgrading links. In August 2018, this post was updated to account for the fact that Texadelphia has returned to the Houston area and that Logie's is renovating.
Posted by Pseudo3D at 10:23 AM