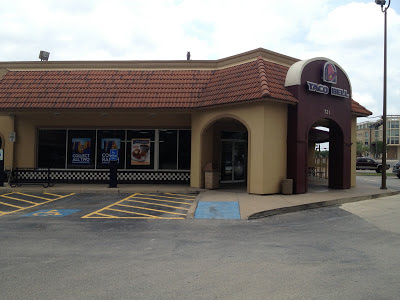 The restaurant began renovations in July 2013. It doesn't look like this anymore.

This was built as a James Coney Island (out of Houston) in 1992, and deed evidence indicates it became a Taco Bell in 1994. I don't have a picture of the building when it was a James Coney Island, but I can surmise it looks similar (if not identical) to this picture, right down to the door placement, the black and white checkered part, and, just out of view in my Taco Bell shot, a circular window. Before the James Coney Island, it was an old-style Texaco, built with custom maroon roof tiles instead of the stock red.