The Lost Buildings of Luther Street and Wellborn Road 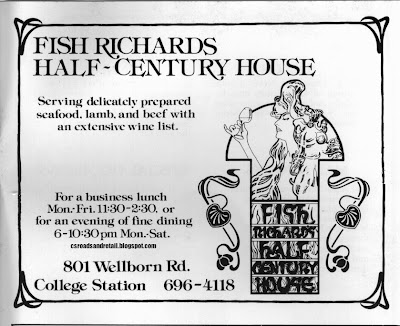 At one time, the block where Berkeley House is featured a fine dining establishment in a converted house (from Center Magazine)

This is one of the posts I've had for years on the blog and despite tons of rewrites still may come off as disjointed, and needs a bit of a proper introduction.

Today, the entire block features a large apartment building, Berkeley House (opened fall 2018), a student-oriented complex. It is impossible to take a good photo of it, as it comes up to the street, and I can't take a photo from the other side, as Wellborn has a curb next to it. As a result, Google Street View will have to suffice, though it is currently not updated yet, only showing the old thrift store that was there.

When I was a kid growing up in the mid-1990s, this corner featured a small convenience store that sold Chinese food, perhaps some of the first (Americanized) Chinese food I've ever had (that or Confucius Chinese Cuisine). Later on it became a thrift store but my father had an old 1940s map of the campus and surrounding area that listed the building as "Hrdlicka Café". What was this café, and how did it become a thrift store?

Over the years, through research and other help, these answers and more were revealed. 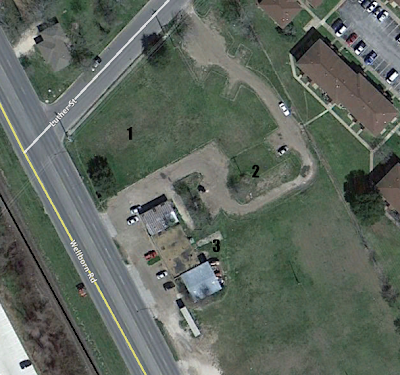 In 1919, a house at what would be 801 Wellborn Road was built by Ed Hrdlicka ("1" on the map below). Eventually, the house passed on to Ed's daughter Marilyn, and her husband Jack Fugate. In the late 1970s, the house was converted into a restaurant—Fish Richards Half-Century House. Fish Richard's menu featured seafood, lamb, and prime rib along with a selection of wines.

Apparently the reason that Fish Richard's closed was due to a divorce by the couple that owned it (some ads in the final days of Fish Richard's discussed a new future location), but the building burned to the ground in 1988, and the 801 Wellborn address went unused for years, until the construction of Berkeley House.

#2 on the map was 803 Wellborn, and wrecked sometime in the late 1990s, likely around the time of the demise of Piknik Pantry (below). This was the home of Fugate's printing press and laundromat businesses and later home to Fish Richards Bakery, the bakery operation of Fish Richard's, which sold a variety of baked goods all day, every day (except Sunday afternoons). I read somewhere (but lost the source) that this was the original supplier for Subway when it came into town in the early 1980s. Ad can be found here.

#3 on the map was 805 Wellborn. This was the likely site of the eponymous Hrdlicka Café from 1920 to the mid-1940s, a student beer joint, dancing hall, and storefront grocery store. "Uncle Ed" leased the store shortly before his death in the early 1950s and by 1957 it was operated by Ed Krolczyk, who tried to make barbecue from "any kind of meat" and claimed to make a great barbecued raccoon.

By the 1960s it was replaced with a convenience store, the Piknik Pantry with Amoco gas (certainly by 1972), though 1980 phone book says "811 Old College Road", indicating not only a rename later (likely holding over from the days when Wellborn and Old College were one and the same, as Wellborn did not extend to Villa Maria but instead curved to Old College) but a renumbering (or just an error). Piknik Pantry & Chinese Food (it sold Chinese food later, and research even shows that an old Chinese restaurant at 3030 E. 29th, Sing Lee, had the same owner) mets its demise in the late 1990s and was quickly replaced with 2nd Chance Resale Shop, operated by Twin City Mission. Based on Chamber of Commerce newspaper clippings, this probably first opened in late 1997 with Piknik Pantry meeting its demise shortly prior. Sometime in the mid-2010s (2016 I believe) it moved to a new location and in 2017, it was torn down for Berkeley House. According to a comment I received in 2015, it featured an all-you-can-eat buffet on Sundays (back in the '80s) for just four or five dollars. The same comment references the gas pumps as well.

There were two more businesses in that block that I haven't labeled.

At 809 Old College (location unknown) there was Astraptes, an "adult disco" nightclub. There's rumors on forums (where it was misspelled as "Astropates", among others) that this was the closest thing to a gay bar College Station had, and according to Houston LGBT History (link sort-of NSFW), it was, mentioning after closure it reopened in 1983 (if briefly--and it's the only Google result that spells the name correctly). 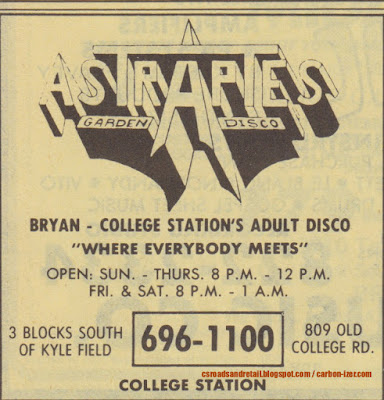 This one is from the 1980 phone book published by GTE.
There was a fifth business, the Peanut Gallery, at 813 Old College, and that seems to be based on what was there on aerials, that it was the metal building directly next to Piknik Pantry. By the 21st century this was just storage for the resale shop. Today, of course, everything described in this post is long-gone. The thrift store and everything around was leveled in 2017 for the aforementioned Berkeley House apartments. Officially it uses 805 Wellborn but some references use 801 Wellborn, site of the Hrdlicka/Fugate homestead.