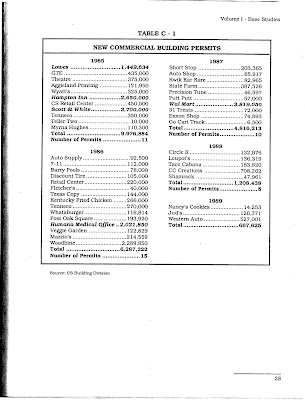 This is removed from the Index and only serves as a resource to what links here.

We rarely get stuff this neat: this is a list of commercial buildings for the late 1980s (taken from a city-produced master plan guide from circa 1990).

No idea where the other 1985 permits except for Scott & White, and that's probably the older building on University, and the Hampton Inn...which is probably the one next to Applebee's. It's likely the Theatre is the Brazos Fellowship building (it was a three-screen theater off of Southwest Parkway), but I can't know for sure. I do know where Aggieland Printing was, up until about 2001, it was located in a little maroon building right about where the water tower driveway is.

The 1986 permits include 7-11 (which replaced a gas station-turned-bar), but it's not a 7-11 anymore, which is a shame: I do enjoy Slurpees, and ICEEs (found at a few gas stations in town, and Target) aren't the same, as they mix syrup and ice, while Slurpees is frozen syrup continually blended (it's true).

Kentucky Fried Chicken is probably the one at Southwest Parkway and Texas, renovated a few years ago.

Whataburger is almost certainly the one on Dominik, which places it as being relatively new before a fire gutted it in the early 1990s (it has since been repaired).

Mazzio's I have unpleasant memories of, it's where Harvey Washbanger's is. The change-over happened in the late 1990s.

1987 brought Putt-Putt Golf (which closed about five years ago or so, dying as "Brazos Valley Golf and Games"), an "Exxon Shop", which I'm guessing is modern-day Franky's (or the Valero on Holleman, or even the Highway 30 ones), and Wal-Mart, which secured its permit that year and was up and running by 1988. I don't know about the go cart track, however...it wasn't Pooh's Park, which was on its way out by that time.

1988 brought Loupot's (probably the Southgate location), Taco Cabana (near Barnes & Noble), Circle K (which is where Texaco is, near Walmart, a funny story on that one, we'll discuss it later), CC Creations (moved), Shamrock (Diamond Shamrock?).

1989 brought "Nancy's Cookies", "Jud's", and "Western Auto". Western Auto is probably the current Advance Auto Parts on Harvey, which is what all Western Autos are now.