Battle for the Promenade - 301 Patricia 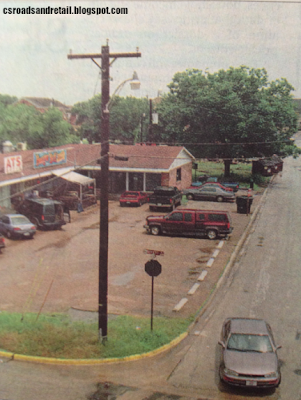 From The Eagle, so apologies for the quality.

Rarely in this town do buildings vanish without a trace. Sure, Fish Richard's is gone completely, but those are exceptions, not rules. Did you know there was a tiny strip center where the Northgate parking lot is, which is next to the Promenade?

It was built at some point in the 1960s (it existed in 1971) late 1960s or early 1970s, and it featured four spaces, with the end store being a UtoteM, a convenience store commonly found in the South. The chain was ultimately bought and absorbed by Circle K in the mid-1980s but most of the UtoteM stores ended up closing (more on that later). 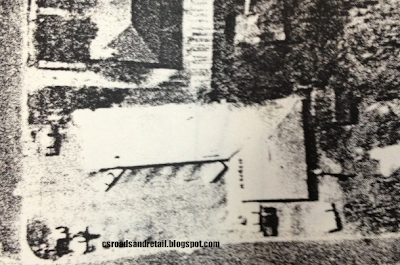 A bit blurry, but on the original, you can actually make out the U TOTE M sign! 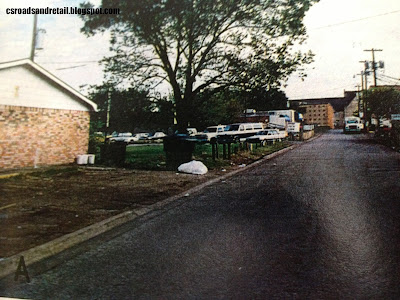 A view from the early 1990s, looking east toward College Main.

Besides the UtoteM, the tenant history has been a little hard to tell: at one point, the three tenants renumbered. In the early 1980s, there was The Varsity Shop (a), Aggieland Washateria (b), and UtoteM (c), and in 1988, there was The Varsity Shop (a), Burger Boy (b), and "The Deli Shop" (c). At some point, however, the space that was UtoteM ended up becoming B, Burger Boy was in C, and B was Advanced Tutoring Services (in the early 1990s). In the mid-1970s, Planned Parenthood even maintained an office here (before their location at 303 College Main) in the era of UtoteM and Varsity Shop. Advanced Tutoring Services (ATS) was owned by the owners of Burger Boy, who might've sub-divided suite B. Additionally, in the mid-1980s (1983/1984 range), there was also Chanello's Pizza, which may have predated the spot where Burger Boy was. 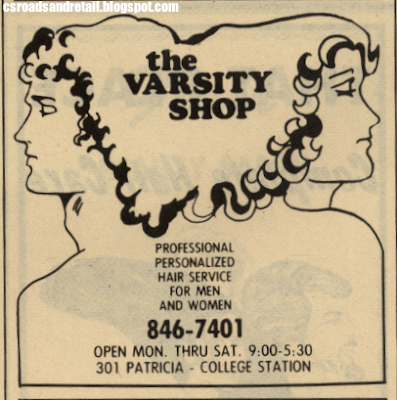 The Varsity Shop, which survived from the 1970s to the 1990s. This ad is from the 1970s.
The UtoteM didn't survive long enough to be a Circle K (a 1983 phone book lists it as part of the UtoteM stores, but by 1984, it wasn't listed with the newly rebranded Circle K stores). If it did convert to a Circle K, it was brief: Circle K began to cut back the most run-down stores (many of the former UtoteM stores exist: the convenience store at College Main and Old College DID survive into the Circle K era). An InSite Magazine issue from 1997 (regarding the Northgate redevelopment) indicated that there was an Indian food store there at one time, but I haven't found it (it didn't seem to be "The Deli Shop", which offered "Frankie's Fried Chicken"). By 1996, it was the offices for the Northgate redevelopment. By the summer of 1997, it was being gutted.

Varsity Shop lasted for around 25 years but closed after spring 1996 after "they could not get any of their beauty operators to return because beauty operators depend on following and there were too many rumors going around" (InSite Magazine), which indicates that they were closed in summer.

It was suite C, though, that caused the stir when the building was going to be demolished in 1997. That was Burger Boy at Northgate (the only business left by December 1996), which had been there since the latter part of the 1980s. The owners of Burger Boy at the time felt like the city was overstepping its boundaries in the eviction of the restaurant, and there wasn't any suitable spot to move to Northgate at the time. It had to stay on Northgate, as a full 90% of its business was delivery via bike. It's worth noting that when Burger Boy moved to Northgate, it replaced the restaurant which is now the Bryan Fat Burger. In 1989, they also had their original location at what is La Familia Taqueria at 300 North Texas Avenue but closed it in favor of the Northgate location, which was now (at this point) at the soon-to-be-razed 301 Patricia. I don't know what was there before Burger Boy.

Ultimately Burger Boy was able to find a new location in Northgate (what is now Daily Ruckus, though prior to Burger Boy's move-in, it was a garage), which the Sopasakis continued to run for the next 13 years. After the Sopasakis retired, the location soon moved and closed in December 2012 (January 2 had the announcement that it would not reopen).

As for the rest of the building, it was flattened in late 1997 or early 1998 for the Northgate Promenade.

Here is one last picture, from The Eagle with George Sopasakis standing in front of his business. Again, apologies for the quality. 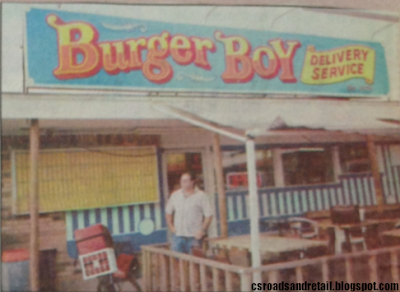 Updated March 2019 - Removed redundant paragraph, removed last section due to outdated metaposting, removed "Part One" from post title
Posted by Pseudo3D at 8:32 AM