505 University Drive East, For Lack of a Better Name 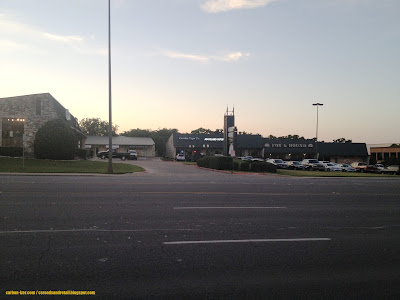 Picture from spring 2014 by author, artificially lightened up as the sun was setting.

Cavalier Cigar Co. - This moved here around 2011 (from Texas Avenue Cigars near Park Place and Texas), features a humidor and lounge area. One of the few places in College Station to smoke indoors.

Charli - Women's clothing store; here since around 1997-1998. Their old location was 707 Texas Avenue, until part of the center was redeveloped for an On the Border restaurant.

Frank's Bar and Grill - Steak and seafood restaurant in the late 1980s and early 1990s.

Fox & Hound - From September 1994 to October 2018, this bar anchored the main spot of the shopping center. It replaced Frank's Bar and Grill, one of the early restaurants here.

Interurban - Restaurant in the 1980s that was here first, named after the interurban trolley that ran on what is now Cavitt between College Station and Bryan.

The post is a little cobbled-together as I had wanted to update an older post but couldn't find a good picture for it. In the sidebar for "Other Related Sites", I added Columbia Closings, which despite a somewhat different format (and not even the same state, this time, Columbia, SC), it's sort of similar to this site and gives a good retail history of the area. It also has a healthy comments section, which I did for years but never really caught on.