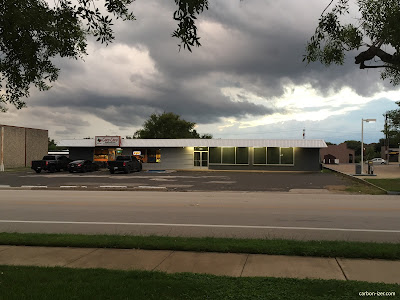 The twilight somewhat reflects the mystery and fly-by-night nature of the tenants here. (Photo from September 2020).
Once again, this is somewhat built out of an older post that I began writing in October 2020. The building dates back to 1972, with the original main tenant being Spin-N-Market, with one location at 1802 Welch (as Welsh was called back then) and the other at 502 Harvey Road.

It was rebranded as Korner Pantry (this was store #21), a Houston-based convenience store in the early 1980s, but that convenience store disappeared by the mid-1980s (as per Houston newspapers) and instead became a generic convenience store known as Student Korner. (It may have even closed briefly, given the lack of a listing in a 1984 phone book).

It was open as of 2003 but at some point around 2005 quietly folded, even though the Student Korner sign by the road remained. In the early 2010s, it was "Determined Faith Christian Center", which gutted the space and added some curtains and carpet, but only remained a few years. In the year 2016 (closed by very early 2017), it was Cachet Liquor Store. You can see that despite lacking any formal signage, an "Open" and "ATM" signs are there, as well as what looks like reflections of fixtures inside.

In late 2020, I wanted to take a daytime photo with some interior shots but was thwarted somewhat by a new tenant there, BetaMed, focused on mobility-focused medical equipment. The store was stocked but not much had gone in the way of décor, with the flooring being bare concrete showing the scars of Student Korner's tiles and the glue from DFCC's carpet. However, as of January 2022, BetaMed already seems to have passed on from this world given how the name (it was never on the building itself, just the window) and the building seems empty.

Next to it, in the same building, Coco Loco has been operating since August 2004. I was told that the Coco Loco was some sort of hole-in-the-wall Greek restaurant prior to Coco Loco, but I can't find anything on it. However, it was "Bombay Restaurant" in the year 1994.
Posted by Pseudo3D at 10:18 PM