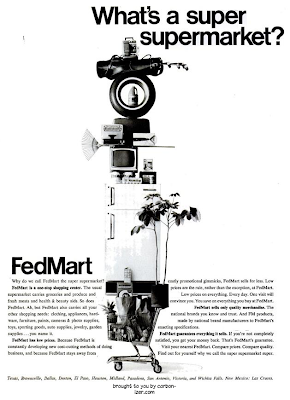 This ad appeared in a publication shortly before coming to College Station. (Google Books)

Before Wal-Mart, there was Kmart, at least locally. But both were founded in 1962, and in 1954 there was already a "Mart" in San Diego, FedMart, founded by Sol Price. In fact, the late Sam Walton "borrowed" a number of concepts from FedMart, including the "Mart" suffix (the rest of the concept was lifted liberally from Ann & Hope, which ironically Wal-Mart forced out of business in 2001).

FedMart was called such because it was only open as a membership-only store to government employees but this was dropped by the 1960s. In November 1973, a few months before Kmart arrived, FedMart came knocking on the county's door and featured "one-stop shopping" including not only apparel, sporting goods, and other dry goods, but a complete supermarket. 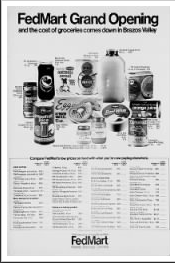 Sorry, you won't be able to click for larger size on this one.

The FedMart at 701 University Drive East (like all FedMart stores at the time) was not a "full" supermarket, only offering a few brands and sizes of a given item that a full supermarket would carry more of.

I don't have a picture of FedMart when it was operating, but given an old early '80s map depicts the now-closed store as looking almost exactly like one of the San Antonio stores, it's assumed that the College Station looked like it too. 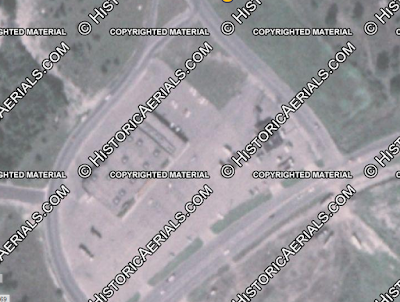 Aerial photo of FedMart around the time it closed, c. 1981
The auto center appears to have been built into the store itself, but the liquor store (FM Liquors) was at a different address, 707 University Drive East, at the corner of the newly-built Fed-Mart Drive (later East Tarrow Drive) and University Drive East.

FedMart's time in College Station would only be for less than a decade, perhaps owing to upper management's decisions (based out of Germany) to expand to a full "hypermarket", which didn't really work in most of the locations (and the concept was largely untested in the United States). The College Station store, along with all the other stores in the Texas division (San Antonio, Dallas, Houston, Victoria, etc.) closed in November 1981. The chain's Arizona and California stores went out of business less than a year later.

FedMart's death left a large building in a not-all-that-great location abandoned, and it was soon converted to other uses. Kettle (No. 145) opened a location at the site, with the chain reaching an all-time high of five locations in Bryan-College Station alone (as mentioned in the page on the current College Station Kettle).

Eventually, the building was expanded into a full strip center. From what I can tell, tenant numbers weren't really done in the center, so I'll share what I have. While the building was not demolished until around 2016, the center began clearing out in the very early 2010s, after a long drama that briefly had the center under city ownership (since 2008) as part of a failed bid to build a large hotel/conference center.

Chimney Hill Bowling Center - One of the center's biggest options, here in the mid to late 1980s but not listed in a 1993 directory. Indications are that when Wolf Pen Bowling opened around 1994, the lanes moved here, and there wasn't a huge gap between Chimney Hill's closing and Wolf Pen's opening. The space ended up being used as storage for other uses.

David Gardner's Jewelers - This upscale local jewelry store was originally at Chimney Hill (as of 1993) before moving east at some point.

Kettle - Previously mentioned above, presumed to take part of the center that was the original FedMart, did not last more than a few years.

Qualice Network Services - Listed as a tenant in 1993.

Rembrandt's - A restaurant that succeeded Confederate House/Tradition. Around in the early 1990s.

The Republic - Also known as The Republic Steakhouse, or The Republic 1836 Steakhouse, opened in 2006, and was the very last to leave the old Chimney Hill/FedMart building, even as the rest of the building was demolished. (See the bottom of the article for the new building information).

The Tavern on Chimney Hill - Existed in the late 1990s, succeeded Rembrandt's and preceded The Republic steakhouse restaurant.

Western Beverages - Western Beverages was located in a large wedge-shaped build-out closest to the Albertsons/Randalls side of the building, and was one of the last ones to leave (as late as early 2014).

715 University Drive East (probably the original 707) was the home of the Bryan-College Station Convention & Visitor's Bureau but around the early 2010s or late 2000s they moved out, and the building was demolished ahead of the rest of the building's demo. I know I went in there at least once for the latest copy for the official Bryan-College Station map (which is rife with errors that never get corrected, but that's another story).

The old FedMart met with some success as a shopping center (even including a bowling alley at one time), and later down the road was bought to be redeveloped into a convention center for the city, but that even failed and it dwindled down to little more than the Republic Steakhouse (very upscale, accessed from the east end) and a Western Beverages (in a section that was newly built out from the original).

After the city sold it at a loss, there were plans for it to be a multi-story/mixed-use building which would demolish the remaining building except for The Republic, which wasn't part of the original 1973 building. This got far enough along to make it into a New Development listing and even had a promise of Houston-based Black Walnut Cafe opening a location, but ultimately it fell through and was replaced with a rather simple redevelopment that would leave it looking much like the rest of University Drive East, with a new building for The Republic, a new Starbucks, and space for a Drury Inn.