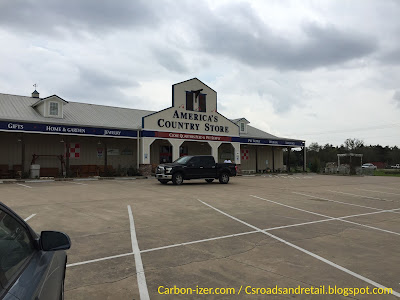 Picture taken March 2019
I love lineages of companies, and you may have noticed the Purina checkerboard logo on the outside of this store, just like many of the Purina-branded pet food inside. The thing is, those are two different companies, and they have been for decades. The "America's Country Store" is a franchise of Purina Mills, which operate animal feed mills in rural areas, but it spun off from the original Ralston Purina in the mid-1980s. Purina Mills has been owned by Land O'Lakes Inc. since 2001, while the original Ralston Purina (having divested all of its "human food" operations over the years) was purchased by Nestlé around the same time and merged with their Friskies PetCare Company division (becoming known as "Nestlé Purina PetCare" since). One place in town with Ralston Purina heritage is, surprisingly, Jack in the Box, which Ralston Purina owned in the 1970s and 1980s, and we recently had a post regarding the one in College Station.

America's Country Store started in 1997 but the College Station (Wellborn) store opened in October 2005 by franchisee Close Quarters Feed and Pet Supply. It was always designated toward animals, but in recent years (very recent, apparently, as of this writing) converted its garden center into a pet boarding service. This is just out of view in the picture, but can be seen in Street View (as a garden center at least as of this writing).