At Park Place and Texas Avenue 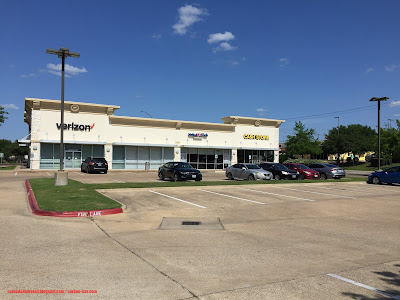 An unexciting strip mall. (Photo by author, 4/20)
Before the current strip center here was built around 2005, the site at 1808 Texas Avenue South was originally Long John Silver's No. 5347 (may have originally gone by the chain's old name "Long John Silver's Seafood Shoppe"), and shut down around 2004 when it was discovered it was a front for a drug operation (and unfortunately, I can't find the article).

The strip center today has a Verizon store (changed logos after the parent company did), "Cash Store" (payday loans--and apparently that IS its legal name), and Naked Fish sushi restaurant. Naked Fish remains open despite less-than-excellent health scores and originally the home of Doc Green's.

Doc Green's, a soup/salad/sandwich chain out of the Atlanta area, made its first stand in Texas here in late 2007 (and in Austin a few months later) with a logo that is no longer used by the company. Unfortunately, neither one did particularly well. The Austin one closed up in less than a year due to back taxes being owed, and the College Station one puttered out within a few years.

Doc Green's opened February/March 2007. I worked there for a very short time (March to May/June). It was run by some disgruntled former Freebirds managers that thought they could run a restaurant better than Freebirds (where I also worked for a couple years). They couldn't have been more wrong. They were so horribly disorganized that I can't believe they lasted. For example, they were open for months and still hadn't installed paper towel dispensers. They couldn't keep up with ordering and wouldn't order the same things so the menu changed constantly just because they'd run out of stuff. It just was really poorly done. I'm not sure when exactly they closed, but I know it was longer than expected. They were pretentious for a restaurant that casual but the food was pretty good.

Cash Store was also not an original tenant, it was originally Systek Computing. Systek moved to a strip center behind the newer plaza when it was built by 2011.