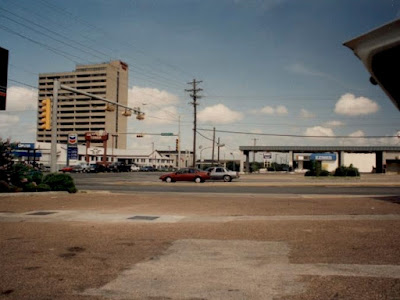 University Tower, taken from a car parked catty-corner at what was Diamond Shamrock (Project HOLD)

May 24, 2012, 6:40 AM:
There probably hadn't been that many people on the Polo Fields since the last Bonfire burned, and the busiest intersection in the city, University Drive and Texas Avenue, was closed down. The occasion? The Plaza Hotel at 410 Texas Avenue South was coming down. It was rare to see an implosion in College Station (two years later Kyle Field was imploded, but a large-scale structure implosion hadn't been seen before in College Station, or since).

Thousands showed up to the implosion, crowding the streets, making it there quite early (or in some cases, extremely late). It was a diverse crowd: students that stayed for the summer, families, the old and the young alike. After a ten minute delay, 6:40 AM was the moment the quarter-ton of dynamite in the upper levels detonated and the building crumbled to the ground, with one of the four people imploding it. The mayors of College Station and Bryan, TAMU chancellor John Sharp (can't resist a chance at publicity), and a fourth man, Joe Ferreri. When the building cracked apart, with the elevator shaft separating from the building in the process, people cheered, a massive dust cloud blew toward Bryan, and every car alarm in the public viewing area went off.

It was Joe Ferreri that built the hotel and the tower in the first place. The story goes that Joe Ferreri was a successful restaurateur in town, and Texas A&M president James Earl Rudder himself (long before getting a tower, a high school, a dormitory, and a freeway named after him, but after becoming a World War II hero) approached him with a business proposal.

Rudder explained that he was having trouble recruiting faculty to A&M because professors’ wives thought the town was boring. The solution, Rudder proposed, was a hotel across from campus with an Olympic-sized swimming pool, a banquet hall and a faculty club.

Ferreri wasn't so sure. But the former Navy soldier said he knew he couldn’t say no.

I can't nail down an exact opening for the Ramada Inn, but from what I can tell it was 1964 (Brazos CAD still had the page up under the 2011 section).

Imagine seeing this beautiful sight traveling down Texas 6! Doesn't it look nice on a postcard?

At the corner of FM 60 and State Highway 6, College Station's first chain motel (maybe?), Ramada Inn, opened, complete with a tall, lit "Uncle Ben", Ramada's mascot. It delivered on all of Mr. Rudder's wishes, and within a decade new hotels and businesses were opening up and down Texas Avenue.

In the early 1960s (1960-1964, I was unable to nail down an exact date), when the Ramada Inn opened, it was the fanciest thing in town. Replacing eight homes that sat on the property, and outstripping the MSC in class and elegance, the Ramada had both motel-oriented rooms and hotel oriented rooms. It was also the only place to drink in town due to dry laws. Like many fancy hotels, during the 1970s, it held a few small retail tenants besides the restaurant, a travel agency and a hair salon (The Hair of Affairs).

Beefeaters: The restaurant in Ramada in the mid-1970s. What exactly is "heavy beef"?
There was another building that was on the premises that was not demolished when the hotel was built, and to this day is still somewhat of a mystery. You can see a picture here, just on the other side of the UtoteM store. Previously, I had written this was a location of a store called "100,000 Auto Parts" which had the same address of Ramada Inn (410 Texas Avenue, which it had up to its demise) but it turned out it was 410 North Texas Avenue in Bryan, so I don't know. I don't ever remember this being occupied in the 21st century. Brazos CAD says it was built in 1949, under "Units on Univ Dr". 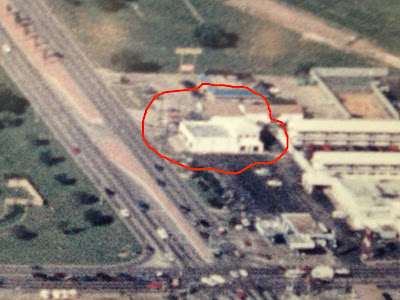 Previously, I had written this was a location of a store called "100,000 Auto Parts" which had the same address of Ramada Inn (410 Texas Avenue, which it had up to its demise) but it turned out it was 410 North Texas Avenue in Bryan, so I don't know. I don't ever remember this being occupied in the 21st century.

When the Ramada was getting consistently full on a nightly basis, it had to expand, so parking was placed behind Meadowland (replacing more homes, of course) and a 17 floor tower was built in 1980-1982 (Brazos CAD says it was built in 1984). The construction involved demolishing the east end of the hotel and enclosing the swimming pool under a huge glass skylight. The top four floors were sold out as loft-style housing to wealthy Aggie alumni, all of which got rich off of the oil boom.

By the time it opened, oil prices were bottoming out, with a recession hitting Houston and College Station, with many restaurants outright closing. Jobs were lost. Banks closed. Real estate plummeted. In 1987, Ferreri declared bankruptcy and lost the hotel. I can't find exactly what happened in the process, but it looks like Ramada Inn either closed it or sold it, but the Ramada name ended up going to an existing hotel further south on Texas Avenue and in fall 1989, the building was reopened as a combination hotel and upscale student dormitory. Gone was the Ramada Inn name, as the company was now in a smaller building further down on Texas Avenue. Rather than Joe Ferreri, control went to California-based financier Leonard M. Ross, who renamed the building. UNIVERSITY TOWER shown from red neon to afar, but it soon fell into disrepair, partially because the hotel part disappeared more and more each year until finally becoming student dorms entirely in early 1994. Meanwhile Ferreri ended up going back to restaurants and opened an Italian restaurant in the former Ira's in the Kmart parking lot.

What was once advertising as an upscale hotel in 1990 (see page 4), the horror stories of students living in the tower are talked about to this day throughout message boards and real life. Tales of no hot water or broken down elevators live on and you'll be hard pressed to find someone who lived in and enjoyed the Tower after maybe the first or second year it opened.

At some point, the dorms were converted back into traditional hotel rooms, Ross eventually converted more of the dorms back into regular rooms (with a gala in the top level suite, Buzz Aldrin as the guest of honor) and renamed the hotel as the Plaza Hotel & Suites (this happened around 2004), which replaced the University Tower brandings with a large "P", but it just looked cheap and ugly. All during this time, Ross simultaneously hawked the site to the city in their quest for a convention center site while letting the hotel go to waste (it's worth noting, for instance, that Ross also owned the fourplexes at Meadowland, which were nasty enough to have the hotel at 104 Texas Avenue seal off its back entrance.

In 2007 (about three years after the Plaza name took over), a kid drowned in the swimming pool. In 2008, the kitchen scored a 47 on health reports due to no hot water, which almost never happens (in the University Tower days, it offered a cafeteria, which I bet was nothing worth talking about). After continued problems (and terrible, terrible hotel reviews) the hotel shut down for good in 2010 and sat abandoned for over a year.

It started to get reports of vandals and trespassers, and eventually the windows on the top level suite were knocked out and had to be patched with plywood. In in late 2011 the hotel was sold off as the holdings of Ross went bankrupt. I don't know if he's sold off his $165 million mansion in Beverly Hills yet, but there you go.

In January, the building was planned to be renovated once more as student housing, with the "design [being] complementary to the Texas A&M campus", but the decision was soon made to demolish it after all. After donating the furniture (probably not the mattresses), recycling any material they could, and letting the police and fire departments use it for training, it was gutted, making the building resemble a parking garage (albeit a tall, narrow one) more than anything.

Soon after posting the original version of this post, reader John E. of Southern Retail sent in some shots of what was left. Thanks! 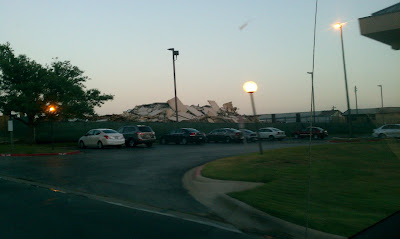 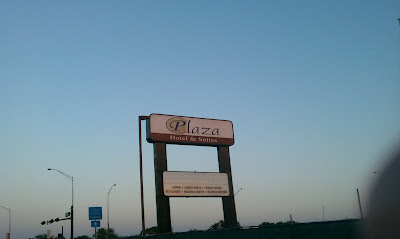 There's also a great video on YouTube on the history of the building and the backstory of Joe Ferreri. There's great period music too, though I couldn't identify all of it.

After the last of the rubble was cleared away, the area sat as a muddy lot for the remainder of 2012. Of course, if you drive by today, you'll find new, huge structures on the site: Northpoint Crossing. Shorter, denser, and larger than the old Plaza, the former home of the tower has completely changed, along with the old Chevron, UtoteM/smoke shop, and Kettle in the area. As of this writing, the new article on Northpoint Crossing isn't done yet, but it will be covered here.

In a way, I'm a bit sad that the hotel had to go that way. Since the the Rise isn't an attractive building, I kind of wish University Tower had done something in the 1990s instead of letting it deteriorate. Rather than the boxy, "generic 70s hotel" tower (the former Holiday Inn/Days Inn/Heaven on Earth Inn in Houston had the same problem), they could've enclosed the entire building in glass, taken out the Gulf/Chevron on the corner of Texas and University, demolished the last of the original motel that wasn't part of the connected portion, closed off Meadowland Drive and turned the whole thing into a combo dorm/retail center, a la Dobie Center, so we could have something to compete with Austin in the 1990s, plus it would've filled in for any fast food establishments that WEREN'T on Northgate already. The downside to doing so would that it still would've been far away from the rest of Northgate (a long walk down past the University Apartments), which I think was/is also why Northpoint Crossing isn't doing as well as it could. With Century Square now built, that's probably less of an issue, but it's still far away from campus proper.