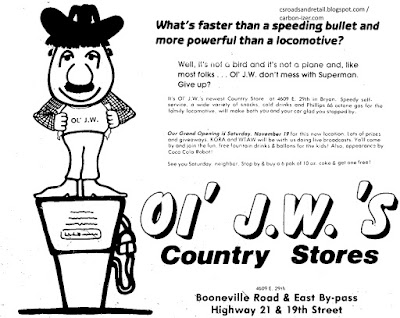 More accurately, Ol' J.W. don't mess with Superman's lawyers.
This one was a bit harder to track down the history of, since the gas station did not seem to have a phone number and thus the phone directories were useless. It opened in November 1983 with a Philips 66 gas station (as per the Eagle ad above) and eventually became a Diamond Shamrock (along with the Highway 6/Boonville store mentioned), then a Valero (with "Corner Store", as Valero had rebranded all convenience stores to be), then Circle K (but still with Valero). The Hwy. 21/19th Street location later became a Fina and now serves as a small restaurant. As of this writing, the East 29th gas station today still shows as a Corner Store on Google Maps.