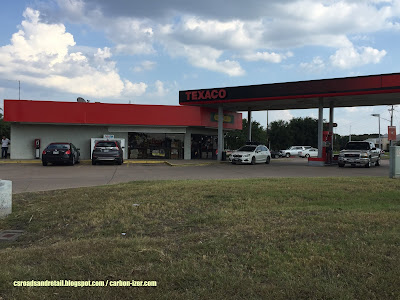 Picture by author, September 2019
One more story before a major rewrite of the post on the College Station Walmart is done, the gas station on the corner of Longmire and FM 2818, southeast corner. Originally addressed as 1600 FM 2818 before becoming 2201 Longmire Drive, the gas station opened after Walmart but before Albertsons, opening around 1989 as perhaps the last "original" Circle K store to be built in the area. By the time Circle K left the area in 1999 and sold the stores to Duke & Long as mentioned in the post on Circle K Truxtop, the Circle K stores in Houston were long gone, having sold those to National Convenience Stores, which rebranded them as Stop N Go, which ultimately turned out to be a fortuitous move as whatever was left of those stores plus new ones were re-taken by Circle K within the last year as of this writing.

As for this store, the name eventually gave way to "Handi Stop" after Everyday, with the Conoco trading in its name for Diamond Shamrock (the last prototype with an italicized logo) in the early 2000s and Texaco taking command in the late 2000s as new owner Valero discontinued the Diamond Shamrock name, a move surely not unnoticed by the former "Sevcik's Texaco" across the street.