Under the Water Tower 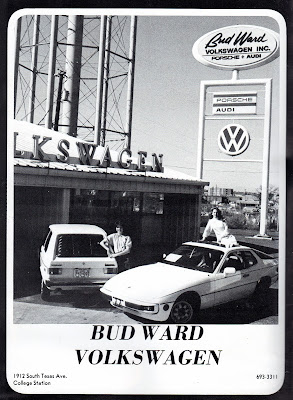 From John Ellisor comes this picture of Bud Ward Volkswagen. I think I see the old Holiday Inn in the background.
The pad site where Hancock Whitney bank (at 1912 Texas Avenue South) is today has its own history that's set apart from the large H-E-B store behind it. The water tower that stands guard over the H-E-B replaced a smaller water tower almost directly at the corner of the intersection, where the H-E-B gas station is today. 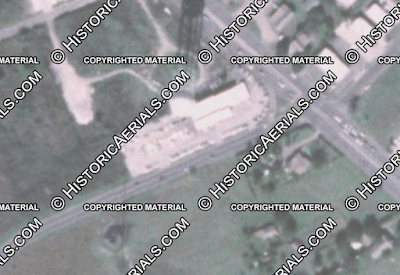 Originally, it was a car dealership. Richard Barton Mazda-Volvo was here from around 1975 to 1976 for sure, and from 1977 to 1988, it was Bud Ward Volkswagen, pictured above. A 1978 article from The Eagle mentions that Ward added Porsche and Audi lines (but did not stock top-of-the-line Porsche cars) when the facility expanded.

In 1994, it opened as what I remember the corner being, El Chico opened in 1994. El Chico is still around in some form and despite a logo and image update, there's only 7 locations left in Texas from what was once dozens.

El Chico survived the construction of H-E-B, and continued with the chunk of the old parking lot they once shared with 1801 Holleman now connected to H-E-B's parking lot. Unfortunately, El Chico ended up closing in late 2005, largely citing popularity and access reasons (by that time, construction on widening Texas Avenue had begun).

A few years later, the pad site was demolished entirely (including the old parking lot) for MidSouth Bank, which was rebranded as Hancock Whitney in late 2019.