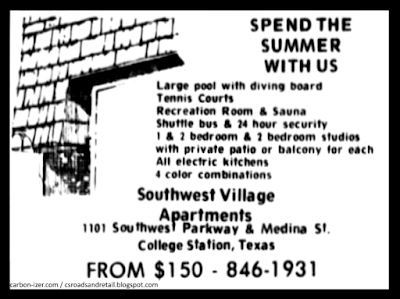 Looks pretty structural similar to today, but not so much on the other parts (Advertisement from The Eagle)
I typically do not cover any apartment buildings on this site, the few exceptions being mixed-use structures or other legacy articles.

Today will be one of those rare exceptions, with this 1974 advertisement giving a rare glance into what was a nice apartment complex at one time at 1101 Southwest Parkway, then known as Southwest Village Apartments.

The exteriors themselves look like they did in the 1990s save for different paint jobs, and I assume the original cedar shake roof as shown in the advertisement was changed after a massive apartment complex fire in Houston in 1979 that ended use of them.

The complex became The Colony Apartments sometime between 1989 and 1993, and remained up until the late 2000s (still The Colony as of 2007). In 2013 it was University Park Apartments (despite being nowhere near the street named as such), and around very late 2016/early 2017 became "The Vintage", stylized as "the|Vintage". There's a real disconnect between what is advertised and the actual state of the apartments. It painted the apartments dark gray with splashes of purple or blue trim, did some interior work, and replaced the basketball court (which was built over a creek) with something else.

Based on exteriors alone, it still has a crumbling parking lot and carpeted open-air hallways that are grungy and reek of cigarette smoke, so by all outside looks the Vintage is just another repaint, not a total revitalization of the property (I'll let actual reviews of the interiors and management speak for themselves), and indeed, most of the apartment complexes (which were already showing signs of age in the late 1990s) are in similar conditions. They can try new names (The Grove at Southwood is Brownstone's second name change) and updates but they'll continue to slide downhill until major changes in the corridor are made. It's a bit of a shame since Southwest Parkway really did mean a lot to me growing up, but what can you do?
Posted by Pseudo3D at 2:00 AM