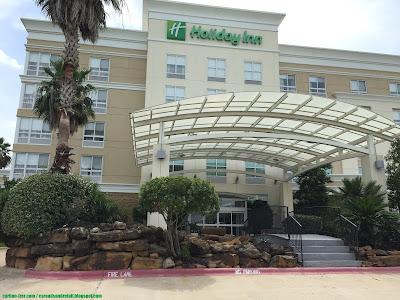 This is indeed my photo from July 2020. It's a far cry from the glossy evening shot for the official website, but whatever.
Two posts in two days? You bet! If you haven't checked it out, visit the new Kyoto Sushi page. Last year, the the Four Points by Sheraton, at the old Holiday Inn on Texas Avenue, closed down. While it is up for redevelopment (no hard evidence of anything yet), let's turn to the last Holiday Inn in the city we need to cover (excluding the Holiday Inn Express locations on University Drive East).

The modern Holiday Inn & Suites College Station - Aggieland at 2500 Earl Rudder Freeway opened around 2006 (looks like it was still under construction in October 2005, but it might've opened in some capacity by the end of 2005) and contains about 116 rooms and 48 suites (per a 2005 directory, and based on my experience writing for The Houston Files, no room count is ever 100% correct), and briefly was branded with the 1980s-era Holiday Inn logo before receiving the modern 2007 one shortly after it was announced (unfortunately, I can't find a picture of the Holiday Inn before re-branding).

Kem's Restaurant & Bar, named after the hotel chain's founder is open for breakfast and dinner these days (lunch appears that it was cut even before March 2020). In talking about the old Holiday Inn this one replaced, I assumed that Holiday Inn's restaurants were only advertised due to a relative lack of other competition, but now I'm thinking it was a corporate decision at some point in the late 1990s to stop advertising their restaurants (or have unique concepts). I don't know if Kem's was the restaurant since day one, though.

As the hotel has gone through no new flags, nor has interesting restaurants documented, and of course, is still open, it makes it less interesting than the old Holiday Inn. Then again, there aren't many interesting motels/hotels in the area left worth writing about. We've already written about hotels in sixteen other entries, and covers 19 hotels in total, including the Hilton, both of the older Ramada hotels, Days Inn, and a few others. Well, 20 hotels, including this article you're reading right now.

The hotel has the address of 2500 Earl Rudder Freeway but its parking lot is at the intersection of Holiday Inn Lane (from Southwest Parkway) and Holiday Inn Drive (from the frontage road), and more recently, a large, multi-story storage center was built between the hotel and the highway.
Posted by Pseudo3D at 1:25 AM