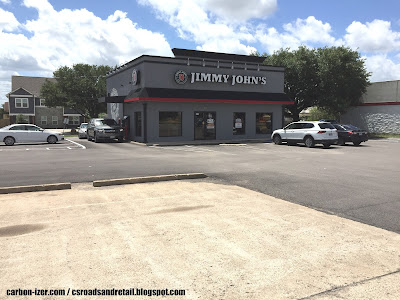 Might be a bit overcast but this is "Egg Roll House" looks today after an extensive re-do (June 2020 picture by author)
In perhaps a first for this site and sister site Carbon-izer, Carbon-izer was actually sourced on TexAgs for a bit on Egg Roll House, as opposed to the site's early days when TexAgs served as a primary resource for additional information beyond what I could remember or scrape from Project HOLD. While this restaurant was first covered on Carbon-izer, I can take some time to personalize the story about it.

Even back when I was younger, the University Drive East corridor was always one of the most interesting of the city (of College Station, anyway), a mishmash of suburbia both old and not quite as old, and going out to eat usually involved passing through the area. Of all the older buildings there, one building stuck out, an abandoned restaurant near the intersection of Texas Avenue and University Drive known as "Egg Roll House".

Egg Roll House actually started out as a location of Taco Torch in 1976 (not to be confused with Torchy's Tacos, a much more modern restaurant covered some years back), an early Mexican fast food option found in the Central Texas area, including Waco.

Taco Torch only ended up lasting a year (and had the address, at least to state tax records, 106 University Drive East as opposed to 200 University Drive East) before it was sold and became Egg Roll House. Egg Roll House was a strange-looking restaurant with hand-painted signage (may have had some sort of lighting on it) that operated from 1977 to around the late 1990s (as late as Christmas 2000), and sat vacant for close to a decade before around 2008 when it was gutted (a few walls were retained) and rebuilt for a Jimmy John's.

Speaking of the TexAgs post above, there were claims that Egg Roll House had a small apartment in it where the owners lived while it operated and several years afterward. If I had my 2005 phone book with me at press time, I might've verified that (or disproved that), but that will have to wait until a future update. The only fact that I did find in researching this for a full post is that former owner Yo-Fu Lee passed away in 2009.
Posted by Pseudo3D at 12:37 PM