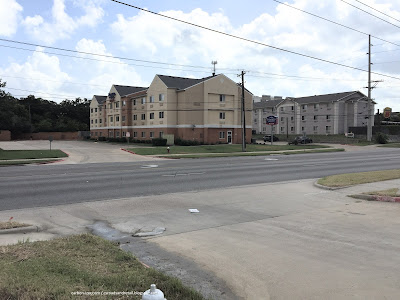 Fairfield Inn in August 2021 (by author)
Fairfield Inn opened in 1994 (early plats read "Heritage Inn #1", there's no way to prove that it actually opened as such), which is a budget/economy chain launched by Marriott in the late 1980s to compete with lower-end motels and hotels like Days Inn and Hampton Inn, and has remained since. The hotel, at 4613 S. Texas Avenue, is the furthest south business on Texas Avenue in Bryan (even across the street is College Station).

Of course, the site it sites on has its own history, with two lots originally on the site, 4613 and 4611. 4613 was the first building on the site, opened in 1957 as "U-Pak-M", a small locally-based convenience store. Following a new schedule set forth by a Dallas based convenience store that made the schedule its own gimmick, the store was open from 7 am to 11pm, and had one other location, at 3800 S. College Avenue, which is now Mini Mart (or "Mini Mini Mini Mart"). In the mid-1960s, U-Pak-M closed and became a new restaurant in 1967, the Barbecue Barn. Barbecue Barn would soon become Arnold's Barbecue, and by 1971, was owned by Thomas Beltrand. In 1976, Beltrand changed the name to his own, despite advertising "New Name in New Location", Tom's Barbecue (no "Steakhouse" yet) was the new name of the restaurant. (It would move to 3610 South College Avenue in 1985...and later, open a College Station location).

In 1965, an A&W drive-in restaurant opened at 4611 South Texas Avenue. According to the Facebook group Bryan-College Station, Texas: Now and Then (friend of the blog), the last reference to A&W found in newspapers was November 1975 that mentioned the restaurant needed a new owner. Well, given what was happening to A&W's parent company United Brands at the time, it's no surprise that A&W closed up shop locally!

Wow, it had an eat-in area? That's better than Sonic ever had.

The good news was by that time, United Brands had started a subsidiary to sell bottles and cans of A&W root beer in stores (today owned by Keurig Dr Pepper after it changed hands several times) but the A&W restaurant (separated from the bottling side) would not return to the area until the late 1990s, and then, only briefly.

Unfortunately, at this time, information on what happened to the addresses after the departure of their respective tenants is unknown. This may be explored by a future update.
Posted by Pseudo3D at 12:01 AM