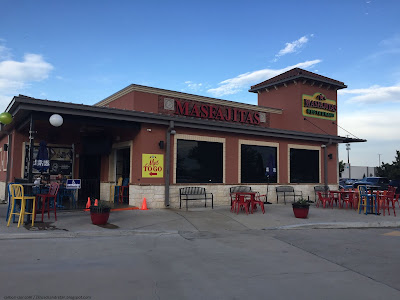 Masfajitas, menos Dickey's. (Picture by author, 8/2021)
Masfajitas (aka MasFajitas) has been listed in the local phone book for years, with (initially) a single location in Caldwell. Only very recently has it opened a native College Station facility, with this one opening in July 2020.

The building was built as Dickey's Barbecue Pit, a hot "barbecue as fast food" franchise that opened many Texas stores around the same time frame. The last commercial development at the old Boriskie Ranch site (see "'At Home' at the Boriskie Ranch", the post this one spun off of) and opening in May 2009 (another article), Dickey's never did particularly well and closed May 31, 2017 (though this website, which tracks closed stores, incorrectly lists it as "4/31/17").

After Dickey's closed, it sat vacant before MasFajitas, which by this time had locations in the Temple-Killeen and Austin areas, announced it would renovate the building and open a store. The renovation ultimately expanded out the building and left very little of the Dickey's facade (at least in front), only the brick part with the stars is original. You can see the original facade at Google Maps Street View and a side view of the building at the aforementioned At Home post.