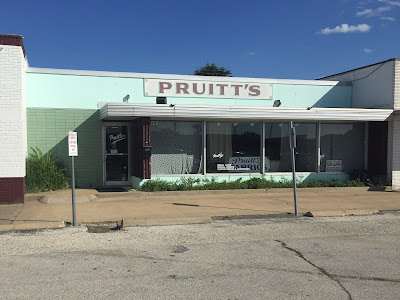 Picture from August 2018 by author.
Well, classes are back in session again, and I can tell from activity...as of early September, the most popular page of the month was the Memorial Student Center page.

Like Dixie Chicken on the other side of campus, Pruitt's Fabrics (it dropped the "Fabrics" on the main sign some years ago, probably as late as 2011 but no earlier than 2008) has just been "there" at 318 George Bush Drive (or 318 Jersey, originally) for years, with its coral-green tile giving away its age. Sadly, Pruitt's has all appearances of being on its last legs, whether that's actually true or not. The store is open by appointment only, the building is for lease, and the website has been offline for a few years now. Pruitt's Fabrics claims to be founded in 1946, but we know in 1956 it was a few spaces down. However, by 1959, Pruitt's Fabrics (or "Pruitt's Fabric Shoppe" or "Pruitt's Fabric & Beauty Shop" as it was also known) settled in its current location, and here we are sixty years later.

Brazos CAD says that the building was built in 1957, which aligns with advertising (no records for 318 Jersey before Pruitt's) and puts Pruitt's as the first and only building in the space.

The building is right next to what is currently Good Bull BBQ but from that post, it has changed hands multiple times, whereas Pruitt's has been constant.

Editor's Note: Check out some recent updates posted around the site! Former NAPA Auto Parts is getting a new tenant. Wolfe Nursery has a link to a history I wrote of the company. Did you know it was owned by Pier 1 Imports for a time? Speaking of Pier 1, Texas Avenue Crossing lost another tenant, World Market. Texas Avenue Crossing is rumored to get a Sprouts, and I do have some pictures of the pre-redevelopment center (after Academy closed). That will be added another time...Kettle got a minor update (it might just return to 24 hours again, someday...), and finally the At Home article got a minor update. All updates have been re-worked to be a little easier on the eyes, too.
Posted by Pseudo3D at 12:29 AM