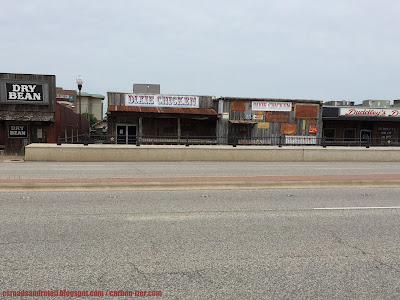 Wish I could get the picture from BEFORE the barrier was put in, but it is what it is. (Picture taken 4/20 by author).

Other than the big "Northgate post" written several years back (and then eventually removed as part of website upgrades), I never saw fit to really cover Dixie Chicken on Northgate all that much. It was never a place with nostalgic value, never went to it as a kid (for obvious reasons!), and it never changed either, which would give it the allure of documenting it for future generations.

The Dixie Chicken started in 1974 when Don Ganter bought a pool hall that had only been around for a few years (estimated to be built in the late 1960s) called the Aggie Den (at 307 University). From some forum threads, you could buy or sell old issues of Playboy, view vintage pornography on (based on how it was described) microfiche, smoke (a no-brainer, everyone smoked inside back in the day), and play pool. The walls were covered with half-naked pictures of movie stars. Don Ganter converted the pool hall to a bar and changed the appearance to, as ESPN writer Scott Eden once wrote, "a honky-tonk as dreamed up by the Disney people who designed Frontierland".

The bar expanded in the early 1980s by adding a kitchen to serve food, and eventually, combining a building next door. This building was even older (from the mid-1950s), with the last tenant being Miranda's, a fern bar. This too was converted to the Dixie Chicken's décor, the exterior entrance covered up and the only major remnant of being it was a painting not covered up by wood (near the snake cage). 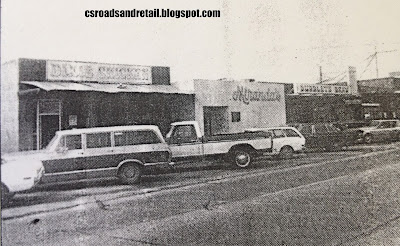 309 University had its own history. The earliest I can find (1963) shows it as being a location of Loupot's Trading Post, long before it moved into its iconic location at the corner of College Main and University. It was vacant in 1972 (shortly before Dixie Chicken's opening) and as of 1978, it was Farkelberry's Domino and Pool Parlor. There may be a few others I may be missing.

Editor's Note: Future posts in the [Series: University Drive] will skip around somewhat, so next cycle's post will not be about Duddley's Draw, and instead go further down University. Also, as per the last article, a number of entries were upgraded with new photos, tenants, and advertisements. These details will be revealed in future installments.