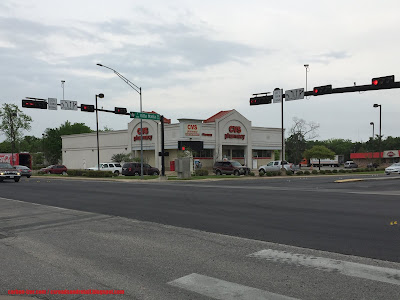 Nothing remains of the first Jimmy Jackson's Exxon but a rather standard Eckerd-turned-CVS. (Photo by author, 3/20)
Built in the 1960s at 3000 South Texas Avenue, "Jackson's Enco" eventually became Jimmy Jackson's Exxon (in the early 1970s, Standard Oil of New Jersey renamed to Exxon to unify the Esso and Enco brands), and by the early 1980s, gained a second entrance when Restwood Drive was rebuilt as an extension of Villa Maria Road. The gas station was eventually sold to focus on the College Station location and in 1998, an Eckerd was built at the site and eventually converted (around late 2004) to CVS/pharmacy when parent company J.C. Penney decided to liquidate the chain.