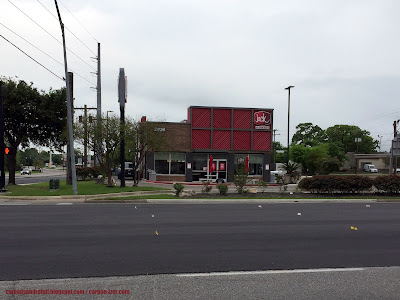 The Box is back after an extensive rebuild.

The sister store to the College Station Jack in the Box further down Texas Avenue, 2906 South Texas Avenue's Jack in the Box was built in 1977 (#675), before the chain's dramatic makeover that dropped the "clown head" speakers and started to push a more "adult", upscale menu.

While the picture at the aforementioned post looks like this one before rebuilding around early 2019 (picture taken in March 2020), the picture here is the one that the College Station one also looks like now. As of this writing, the most recent Google Street View shows the old Jack in the Box building.

The construction also ditched the entrance off of Villa Maria for a new one to Maloney, but it's a moot point since medians installed since 2016 on Villa Maria make access difficult anyway.