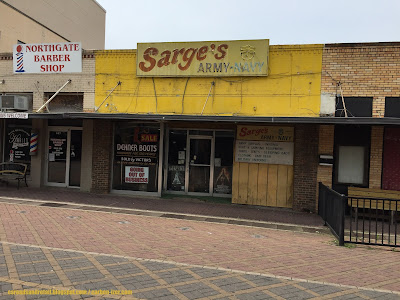 First mentioned in the long-outdated 104-115 College Main page (still up but being dismantled), I had personally never stepped foot in Sarge's, rather appreciating it as a Northgate staple that was part of Northgate itself. At this rate, Sarge's will probably be replaced with yet another nightclub that will just be an eyesore during the daytime. 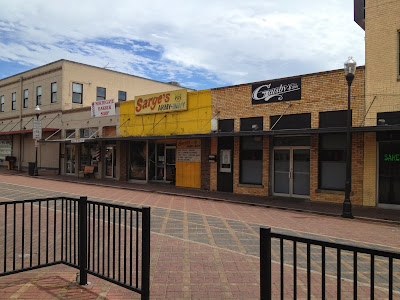 Operating from May 1984 to the end of May 2020, Sarge's was an army surplus store (at least originally) that operated as a Corps of Cadets supply store, including sabers and Corps boots (before TAMU also started selling them). From 1975 to until the early 1980s, University Frame Shop operated at 109 College Main. This store, same ownership as Theo's Gallery at Culpepper Plaza, featured, according to a 1980 ad, not only "custom and ready made frames" but also "New York graphic reproductions" and "limited edition prints & original art".

The building's earlier history (which dated back to the 1930s) is harder to determine. It seems that in the early days (late 1930s), Houston Street and College Main was named Bell (Bell Street?), with the Houston Street portion on campus taking the 1xx addresses and Northgate taking the 2xx addresses; however, other renumbering has taken place and placing the College Main businesses is difficult. Based on that information, it can be inferred that "Jones Barber" and "Wilson Beauty" operated here but more information needs to be acquired before an accurate chronology can be created.

Editor's Note: New comments page (for site as a whole) founded at the old redirect site as part of site upgrades.