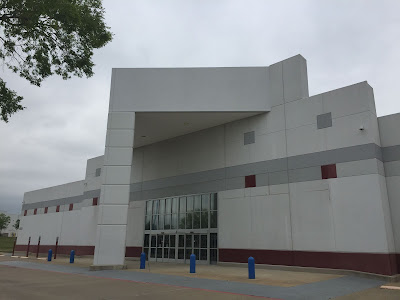 In February 2002, Academy Sports + Outdoors opened a new location at Horse Haven Lane and Earl Rudder Freeway, either just prior to or after the closure of College Station Golf Center, a driving range off of the highway (for more information, see "At Home" on the Boriskie Ranch).

Academy was where I purchased much of my clothes and shoes over the years (never was a sharp dresser) but there was nothing particularly nostalgic about this location, especially given how much the new Academy resembles the old store on the inside.

For years, the store "competed" against the Gander Mountain next door, but eventually would close just as the Redmond Terrace location before it, with the store closing in June 2017 (a new store, about three-quarters of a mile south, replaced it). The store remains vacant, except for the occasional Halloween store that occupies it.

Editor's Note: A reason this post is spinning off from the At Home post is to separate the posts and partially so MasFajitas can have its own page someday.