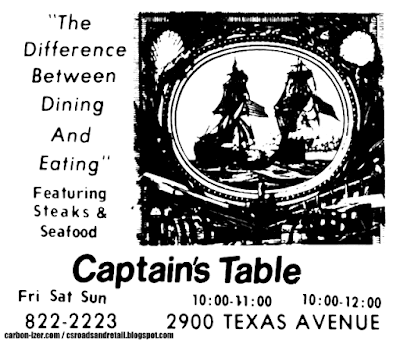 Captain's Table, the second restaurant here, was only open on weekends in October 1974. Bad sign? (Ad from The Eagle)
Clayton's Restaurant opened around 1957 at 2900 South Texas Avenue, and from copies seem to be a family restaurant not particularly specializing in anything based on this 1960s ad copy. 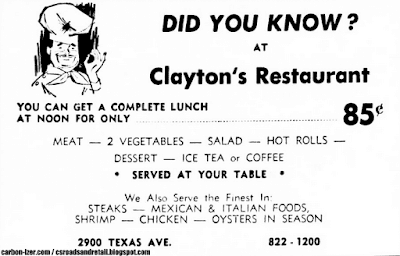 Clayton's had a big menu, but I doubt that most of it was all that good.
In the early 1970s, Clayton's closed and Captain's Table opened in April 1973 in its place, which was a more upscale restaurant with steak and seafood options (among others), including a full bar on the premises. Captain's Table featured a hexagon-shaped road sign that would survive for many years.

In mid-1977 Captain's Table abruptly closed, from still scheduling events in its banquet rooms in April 1977 to a "complete liquidation" of the property by June of 1977. In November 1977, it reopened as First Federal Savings & Loan Association of Bryan, setting a precedent for banks in the building from then to the modern day. While I can't find much on the interim years of the restaurant-turned-bank, by 2005 (nearly 30 years after it had stopped serving food), the bank was now State Bank, which was acquired and rebranded as Prosperity Bank in 2006 with other branches in the area.

If I recall, when I first started driving in the area around late 2010 (going to Blinn, of course), Prosperity Bank had closed its location here in favor of a nearby location, and The First Bank & Trust began renovations on it, altering and modernizing the facade (mostly adding a new overhang) and getting rid of the distinctive hexagon-shaped sign in favor of a traditional rectangle one.